In a research report issued today, Brean Capital analyst Jonathan Aschoff maintained a Hold rating on Endocyte (NASDAQ:ECYT), as the company released its third-quarter results. No price target was provided.

Aschoff noted, “Final OS data from Endocyte’s Phase 2b TARGET trial with vintafolide will readout in early 2015. Endocyte is planning a Phase 3 trial with either vintafolide or EC1456 for FR+ adenocarcinoma NSCLC, but will wait until it obtains final OS data for vintafolide as well as updated Phase 1 dose-escalation data with EC1456 in order to decide which agent to move into Phase 3.”

According to TipRanks.com, which measures analysts’ and bloggers’ success rate based on how their calls perform, analyst Jonathan Aschoff has a total average return of 11.2% and a 57.6% success rate. Aschoff is ranked #250 out of 3364 analysts. 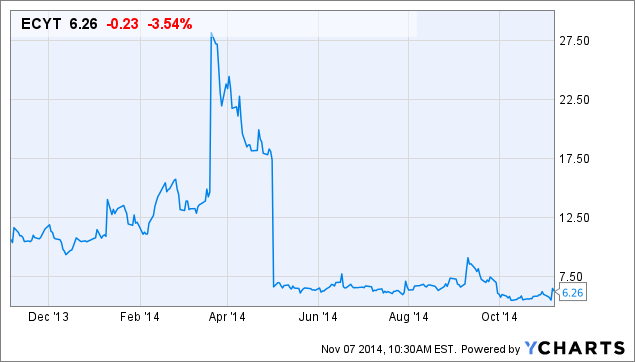