In a research report issued today, Brean Capital analyst Jonathan Aschoff maintained a Buy rating on Soligenix Inc (OTCBB:SNGX) with a price target of $5 in light of the upcoming Phase 2 trial for SGX942, a drug for oral mucositis in head and neck cancer. The drug has been given Fast Track designation by the FDA.

Additionally, Soligenix posted revenue of $1.9 million in 4Q14 and a diluted EPS of $0.08. Aschoff believes that the most important metric at this time is the $5.5 million in cash and equivalents with which Soligenix ended 4Q14. Aschoff added, "Revenue came from contracts with BARDA and NIAID initiated in 4Q13 to support the development of OrbeShield for GI ARS, as well as contracts with NIAID initiated in 3Q14 for the development of RiVax to prevent effects of ricin exposure."

Aschoff commented, "We look forward to the next clinical steps with SGX942 and SGX301," the latter of which is a drug for cutaneous T-cell lymphoma and has been given orphan drug status by the FDA. Soligenix intends to move SGX301 into Phase 3 testing in 1H15. Aschoff highlights that Soligenix released "positive data" on the drug earlier this year. 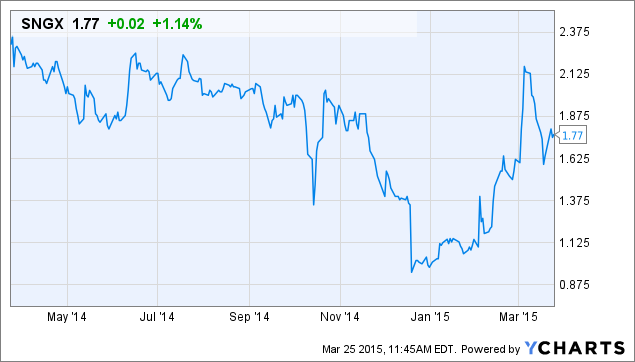 The Bull of the Day: Soligenix (SNGX) Stock Jumps 25%