In a research report published Wednesday, Brean Capital analyst Fawne Jiang maintained a Buy rating on shares of Sina Corp (NASDAQ:SINA) with a price target of $50.00, after the company released its second-quarter results, posting adjusted earnings of $0.06 per share on revenues of $211 million, above consensus earnings estimates of $0.04 per share and revenue estimates of $200.4 million. Specifically, brand advertising grew 13% year-over-year, driven by Weibo contribution (+47% YoY) and partially offset by a decline from portal ad (-8% YoY).

Jiang observed, “SINA delivered above-expectation 2Q results. The company did not provide quarterly guidance for 3Q15; we expect continued deterioration of its portal ad growth partially offset by solid Weibo revenue growth. While we are encouraged to see the company is committed to investing in mobile and verticalization (e.g. finance, sports) to capture potential future growth opportunities, new business/monetization may take time to materialize and the increasing spending could weigh on margins. From an asset perspective, we believe SINA stock is undervalued. Fundamentally, SINA will need to revamp its portal business with muted growth and margin uncertainties in the near term.”

According to TipRanks.com, which measures analysts’ and bloggers’ success rate based on how their calls perform, analyst Fawne Jiang has a total average return of 1.1% and a 38.9% success rate. Jiang has an -8.3% average return when recommending SINA, and is ranked #1924 out of 3740 analysts.

Out of the 8 analysts polled by TipRanks, 5 rate Sina Corp. stock a Hold, while 3 rate the stock a Buy. With a return potential of 32%, the stock’s consensus target price stands at $51.75. 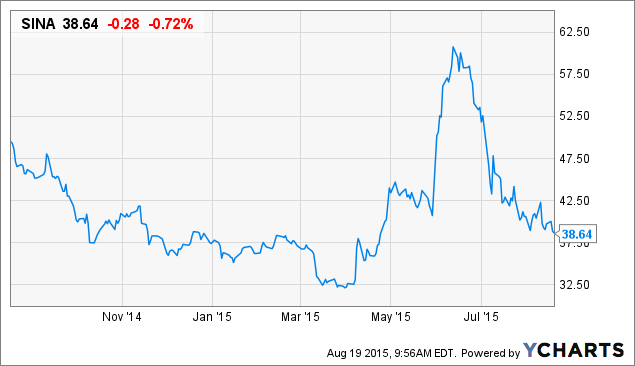