Aschoff said, “At the Retinal Society meeting over the weekend, Ohr presented additional subgroup analysis of interim data from its Phase 2 wet AMD IMPACT trial, notably a K-M curve for time to a sustained 3-line or better gain in mean VA. We look forward to Ohr’s presentation of anatomical data from IMPACT at AAO in late October. Dr. Tom Ciulla will be presenting on October 17 and Dr. Prema Abraham will be presenting on October 18 (as a late breaker), with one of the presentations containing the new anatomical data. The new K-M curve demonstrates that the VA gain of at least 3 lines comes early in a majority of the gainers and that each subsequent time point shows that all achievers maintain the response, with the minority achieving the endpoint at later time points (log rank p-value =0.0370). Maintenance of VA benefit is especially important because this trial was conducted in a PRN Lucentis background where VA fluctuation would be greater than in a background with monthly injections.” 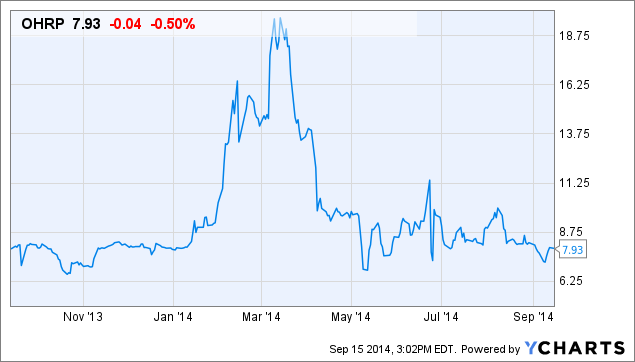