In a research report released today, Brean Capital analyst Jonathan Aschoff maintained a Buy rating on Nektar Therapeutics (NASDAQ:NKTR) with a price target of $20, which represents a potential upside of 38% from where the stock is currently trading. The report follows the company’s third-quarter results, posting revenue of $132.9 million and EPS of $0.53.

Aschoff observed, “We expect Movantik’s commercial launch in the US in late 1Q15 or early 2Q15, given that the DEA already proposed to remove Movantik from the schedules of the Controlled Substances Act. Baxter will submit a BLA filing for BAX 855 by YE14 based on positive top-line data from the Phase 3 trial. The Phase 3 BEACON trial with NKTR-102 in breast cancer passed its interim futility analysis, with top-line results expected in 1Q15 and US and EU filings in 2H15. Nektar plans to initiate the Phase 3 program for NKTR-181 (consisting of two efficacy trials and one safety trial) in 1Q15 with completion expected in 2017. The proposed protocol is to randomize 600 OA of the knee patients 1:1 to NKTR-181 or placebo for 12 weeks after a titration period, with an interim futility analysis in the first 200 enrolled patients. Most importantly, no background pain medications will be allowed in the trial, which was the most fatal of the Phase 2 design flaws, in our view.” 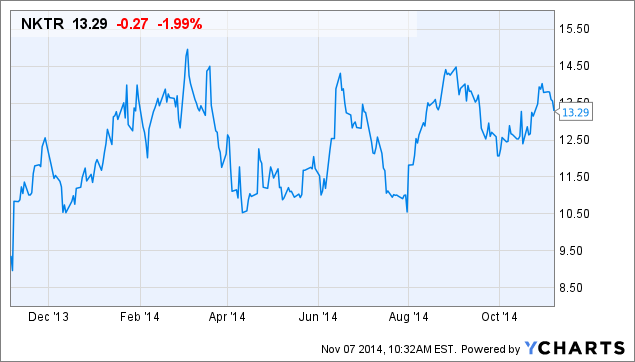