Aschoff noted, “Following FDA approval of ferric citrate (FC) in early September, Keryx will present abstracts at the ASN meeting in November to build FC awareness among nephrologists. All commercial plans cover FC now albeit with high copay initially at launch, and Keryx will provide copay assistance to patients. A unique name for FC’s API was granted, stoking our optimism for Patent Term Extension which, if granted, could extend protection for a patent of choice for potentially 5 years. Ex-US, Keryx is addressing the day-120 questions from the EMA and expects a decision from the EMA in mid-2015. Riona’s launch in Japan is well underway. The Japanese patent office granted two patent term extensions, extending the protection for Riona to November 2025 and November 2022 respectively. The Phase 3 CKD trial is 90% powered to demonstrate a 15-20% difference between FC and placebo, and we look forward to positive results later in 2015.” 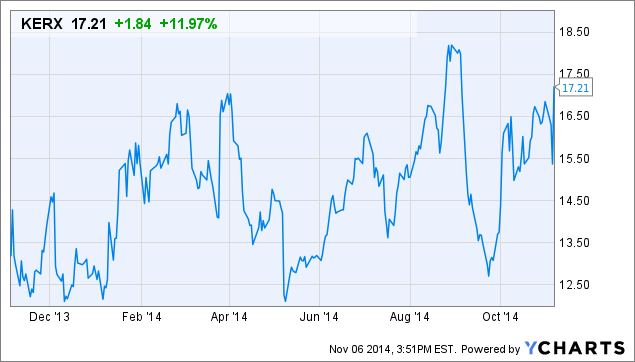