Brean Capital analyst Jonathan Aschoff weighed in today with a few insights on Cytosorbents Corp (NASDAQ:CTSO), after hosting management meetings with the company yesterday. The analyst rates the stock a Buy with a $25 price target, which implies an upside of 131% from current levels. Shares of Cytosorbents closed yesterday at $10.80, down $0.06 or 0.64% percent.

Aschoff noted, “We look forward to the imminent start of a pilot cardiac surgery trial with CytoSorb in the US and a potential pivot cardiac surgery trial in early 2016, as we believe cardiac surgery is a far easier path to US CytoSorb approval. Also, we expect CytoSorbents’ partnerships with Fresenius and a leading medical device company in Europe to expand CytoSorb use and generate increasing product revenue. Lastly, we believe that CytoSorb, with its ability to remove cytokines, may maximize the therapeutic benefit of immunotherapy by minimizing such life-threatening complications. There are already certain key players in the space that are aware of CytoSorb, rendering CytoSorbents well positioned, in our view, to tap into the huge immunotherapy market.” 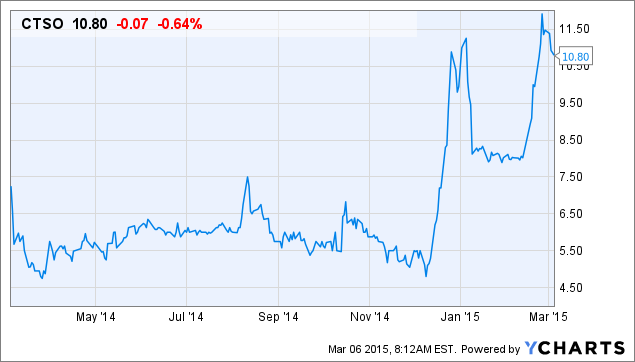