Brean Capital analyst Mike Burton came out today with a favorable report on Qualcomm (NASDAQ:QCOM), as the company reported first-quarter results for its fiscal year 2015, after the market closed on Wednesday. The main story was the Company’s lowered 2H15 QCT guidance due to Samsung opting for its in-house applications processor, ‘Exynos’, over QCOM’s Snapdragon 810 for its upcoming flagship launch (the Galaxy S6).

The analyst rates the stock a Buy with an $80 price target, which represents a potential upside of 22% from where the stock is currently trading.

Burton commented, “We believe that while the Company missed a huge product cycle and there are still overhanging issues in China, we are encouraged by the resolution of one of the disputes and expect QCOM to regain some momentum in the 2H of CY2015 as Carrier Aggregation begins to become an important feature set in the emerging markets.”

The analyst added, “QCOM has historically traded at a large premium to its peers due to high operating margins and the Company’s licensing business. We believe that the Company would continue to trade at a premium absent the headwinds from China. However, given the continued uncertainty, we set our target at a discount to the Semiconductor group, which trades at 17.4x CY15 EPS currently.” 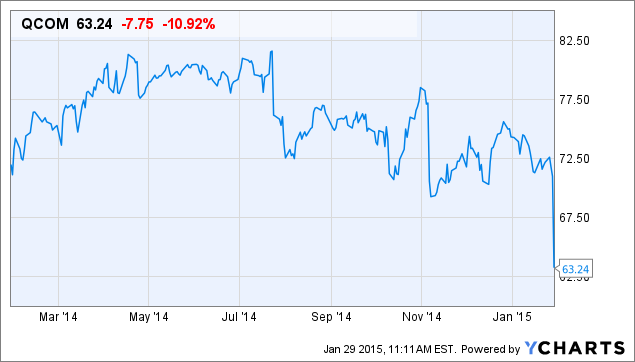