In a research report published Friday, Brean Capital analyst Jonathan Aschoff reiterated a Buy rating on shares of Keryx Biopharmaceuticals (NASDAQ:KERX) with a $22 price target, which represents a potential upside of 335% from Thursday’s closing price. The analyst believes that the recent selloff is overdone, especially when considering several factors that he believes have led to a premature bearish assessment of Auryxia’s ultimate market potential.

Aschoff wrote, “With the biotech sector having lost a bit of its multi-year long unbridled exuberance, we believe that a stock sold off to this extent will better weather any continued storm than precommercial high flyers. While the sales cycle has not appreciably shortened, Auryxia finally achieved a majority of coverage (63% Medicare/70% commercial; 65% total) in early August, which will facilitate prescription writing, which in turn typically begets more rapidly written subsequent prescriptions from the same physician. We also note that Keryx’s 50% salesforce increase should make a noticeable impact on revenue, on which Keryx will be judged more than its bottom line, for the foreseeable future.”

Furthermore, “We look forward to several value creating catalysts for Keryx over the next 6 months or so. This month or next we expect EMA approval for Auryxia, which could facilitate signing a European partner. We also believe that management is motivated to in-license another drug that could utilize the same Auryxia salesforce, and note that this is not the first time that current management has been involved in the CKD market, although timing for this catalyst is obviously difficult to predict. Lastly, we expect the Phase 3 predialysis trial to read out positive results in early 2Q16, setting Keryx up for sNDA approval in 2Q17.” 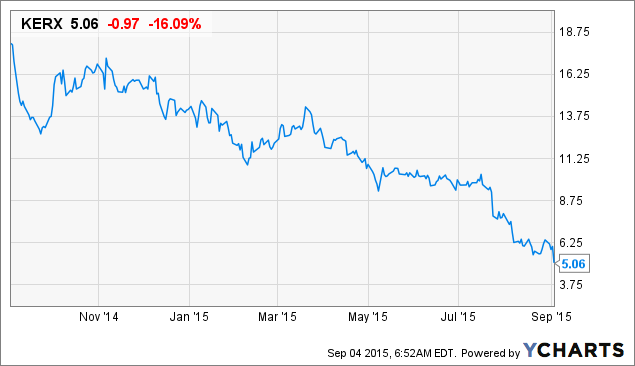