In a research report published April 29, Brean Capital analyst Bryan Maher maintained a Buy rating on Wynn Resorts Limited (NASDAQ:WYNN) and reduced the price target to $153 (from $174), which implies an upside of 41% from current levels. The decreased price target comes after the reported disappointing first-quarter earnings results. Adding insult to injury, Wynn’s Board cut the dividend from $1.50 to $0.50 and suggested it will revisit the payout quarterly until the current Macau market uncertainty subsides.

Maher wrote, “We suspect that with the recent news that Japan may try to push through some preliminary gaming legislation before the current parliamentary session ends in late June, that Wynn is also looking to start harboring some extra cash in case it is lucky enough to get one of the coveted Japan gaming licenses – assuming it passes the legislature. So why keep Wynn shares at a Buy? In short, we think that the opening of Wynn Palace on Cotai in 1H16 will drive revenue (and EBITDA) materially higher and, as such, push the shares higher from current levels. Significant expense has already been invested in this property and we are now less than a year from realizing a return on that investment. Admittedly that return would be higher when/if the Macau VIP’s returned.”

According to TipRanks.com, which measures analysts’ and bloggers’ success rate based on how their calls perform, analyst Bryan Maher has a total average return of 8.6% and a 44.4% success rate. Maher has an -16.4% average return when recommending WYNN, and is ranked #1715 out of 3584 analysts. 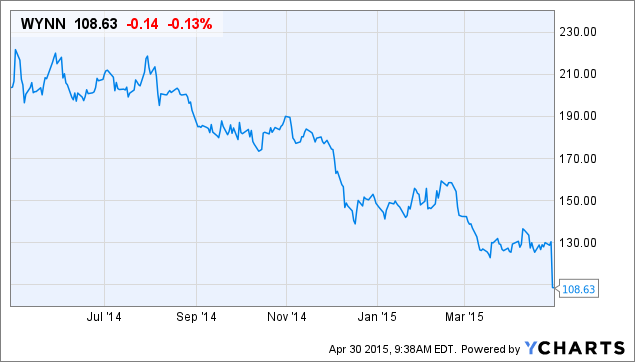 Goldman Sachs: These 2 Stocks Are Poised to Surge by at Least 20%