In a research report released this morning, Brean Capital analyst Jonathan Aschoff reiterated a Buy rating on Cytosorbents Corp (NASDAQ:CTSO) with a $25 price target, after the company raised net proceeds of $9.5M in January to fund its planned pivotal trials in the US and Germany and to expand production.

Aschoff noted, “We project the company to have about $15M in cash after 1Q15. In 4Q14, CytoSorbents implemented a 1-25 reverse split, allowing the company to be up-listed on the Nasdaq market later in December. We raise our TP to $25 from $1 due to the reverse split. CytoSorbents submitted an IDE application to the FDA in December 2014 and is currently preparing for a pivotal trial in the US using CytoSorb intra-operatively in patients undergoing complex cardiac surgery requiring the use of a heart-lung machine.”

The analyst continued, “CytoSorb sales were $1M in 3Q14 up from $0.7M in 2Q14, driven by strong uptake and reorders from customers and distributors. In 4Q14, CytoSorbents entered into a multi-year partnership with Fresenius to distribute CytoSorb in the ICU in 6 European countries. As physicians become more comfortable with CytoSorb, its use should grow broader and deeper.”

According to TipRanks.com, which measures analysts’ and bloggers’ success rate based on how their calls perform, analyst Jonathan Aschoff has a total average return of 13.0% and a 62.5% success rate. Aschoff is ranked #128 out of 3428 analysts. 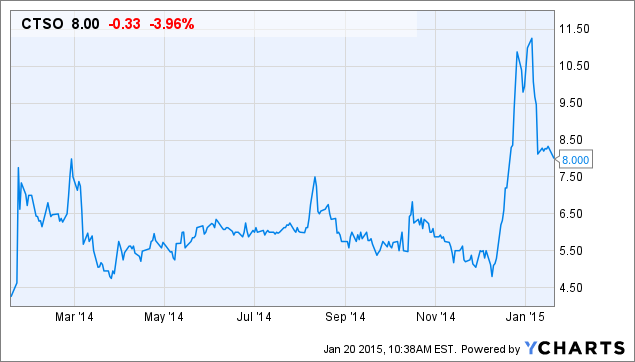