In a research report published Thursday, Brean Capital analyst Jonathan Aschoff reiterated a Buy rating on Medivation Inc (NASDAQ:MDVN) and raised the price target to $125 (from $118), posting revenue of $275 million and EPS of $1.96, beating consensus due to analysts neglecting a $45 million milestone triggered by EU approval of the pre-chemo indication in fourth-quarter.

Aschoff observed, “Medivation provided its full year 2015 guidance for Xtandi US sales to be $1.050-1.125 billion, which we believe is conservative given the drug’s differentiation.” Furthermore, “Xtandi is now approved for pre-chemo metastatic CRPC in the US, Japan and EU. About 7,600 individual prescribers are behind Xtandi’s US sales since its launch in mid-September 2012, versus 6,800 individual prescribers as of the 3Q14 call. A significant number of new Xtandi prescribers in urology and oncology had not previously prescribed a novel hormonal agent.”

Furthermore, “During the quarter, 28,000 bottles of Xtandi were written versus 21,500 for 3Q14. Xtandi US sales growth in 4Q14 was aided by a favorable gross-to-net adjustment of $3.8 million and a previously anticipated inventory increase of about one week. About 80% of the QoQ growth in Xtandi sales was driven by underlying demand following the US approval of the pre-chemo indication. Xtandi ex-US sales were negatively impacted by weaker foreign currencies by about $9 million of 7% compared to 3Q14.” 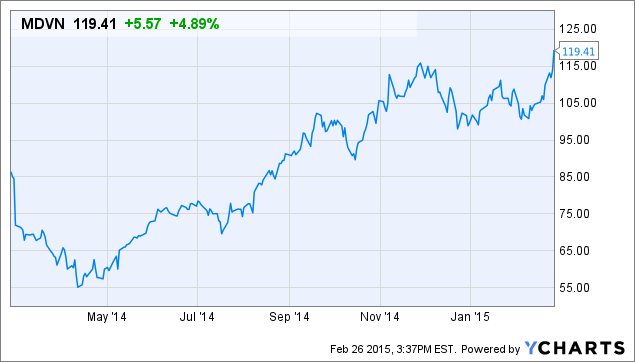