In a research report released today, Brean Capital analyst Difei Yang maintained a Buy rating on Horizon Pharma PLC (NASDAQ:HZNP) and raised the price target to $27 (from $18), following the company’s fourth-quarter results, posting revenue of $104 million compared to consensus estimate of $96 million. Non-GAAP EPS was at $0.27 vs. $0.22 consensus.

Yang noted, “Q4 was a strong quarter, beating consensus on both revenue and adjusted EPS. Based on six weeks of encouraging prescription demand from all five products in the portfolio, management raised 2015 midpoint full year revenue guidance from $438 million to $462 million, midpoint adjusted EBITDA from $170 million to $180 million. We believe the course is set for Horizon to out perform peers in 2015 & 2016. In particular, gaining leverage on the operation in 2016 and leading to EPS growth from $0.95 in 2014 to $1.38 in 2016. Favorable corporate and tax structures may add additional upsides from M&A activities.”

According to TipRanks.com, which measures analysts’ and bloggers’ success rate based on how their calls perform, analyst HZNP has a total average return of 10.5% and a 68.0% success rate. Yang has a 40.4% average return when recommending HZNP, and is ranked #972 out of 3492 analysts. 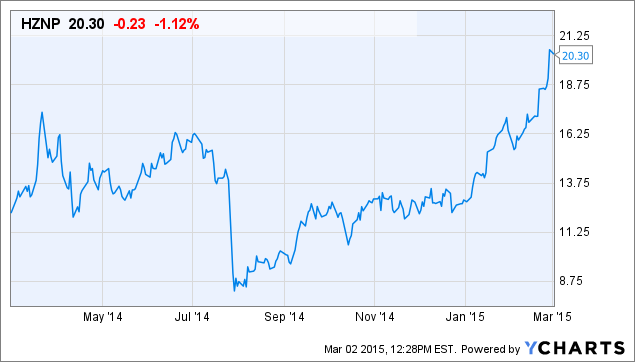