In a research report published Tuesday, Brean Capital analyst Jason Wittes assumed coverage on shares of Progenics Pharmaceuticals, Inc. (NASDAQ:PGNX), with a Buy rating and price target of $11, which implies an upside of nearly 50% from current levels.

Wittes wrote, “We expect continued value creation from: 1) Azedra, a substantially derisked asset for the ultra-orphan indications for often underdiagnosed adrenal gland tumors, which will read out its pivotal trial in 1Q17; 2) Relistor for OIC, which is just now launching in oral form and should see significant uptake; 3) a substantial platform of diagnostic imaging agents and therapeutic products for improved detection, monitoring, and treatment of prostate cancer.”

“The company also had a strong cash position ending 2Q16 with about $60.1 million (does not include July’s $50 million oral Relistor US approval milestone) and thus should be sufficiently funded to develop and further expand its oncology pipeline, especially in light of the upcoming Relistor sales milestones that we expect. A positive read-out from Azedra alone could potentially double the current valuation, in our view, but further, we believe the prostate theranostic platform to be undervalued. Our TP is $11, below our previous $14 target, owing to a now more conservative Azedra launch assumption,” the analyst continued.

According to TipRanks.com, which measures analysts’ and bloggers’ success rate based on how their calls perform, analyst Jason Wittes has a yearly average return of 6.9% and a 58% success rate. Wittes is ranked #454 out of 4197 analysts.

All the 3 analysts polled by TipRanks rate Progenics stock a Buy. With a return potential of 41.0%, the stock’s consensus target price stands at $10.33. 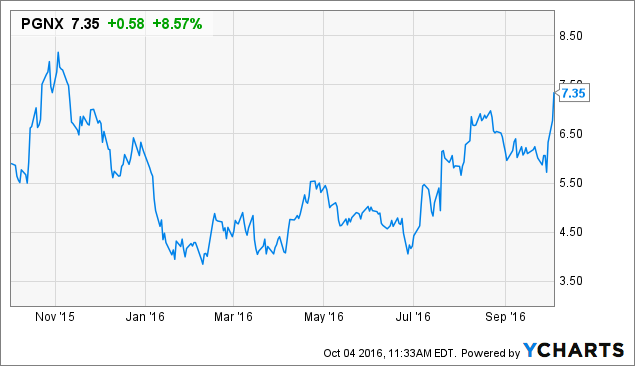