BMO Maintains Market Perform On Hewlett-Packard After Q4 Earnings; Chooses To Sit On The Sidelines

In a research note issued today, BMO analyst Keith Bachman maintained a Market Perform rating on Hewlett-Packard Company (NYSE:HPQ) with a $42 price target, after the company reported October Q earnings that were in line with BMO / Street estimates of $1.06.

Bachman noted, “Overall, segment performance was mixed as there were positives from Enterprise and Software and negatives from Printers and Services. We think that the pending spin-off will continue to be the main focus over the next few months as further details of the transaction will be revealed on the January Q earnings call.”

The analyst added, “We think the stock will probably drift higher over time, helped by the company split, which will raise the visibility of HP’s relatively low multiple. However, we have ongoing questions: 1) Will total costs increase in FY2016 post-split, since HP will have to carry two public companies? 2) Can HP grow revenues, even post-split (more nimble and more focused)? Until we satisfy our concerns surrounding these two questions, we choose to sit on the sidelines.” 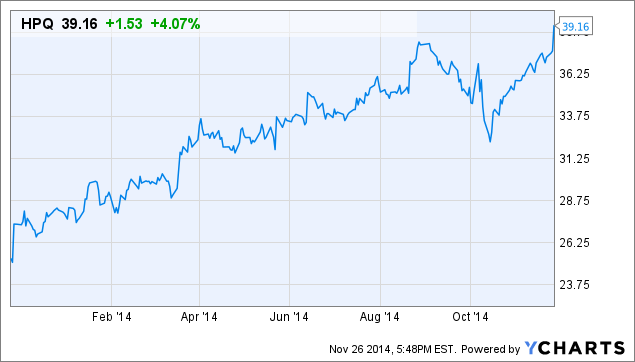