BMO Capital analyst Keith Bachman weighed in with his views on Computer Sciences Corporation (NYSE:CSC), after the company released its fiscal first-quarter results, posting revenues of $2.76 billion, which were below Bachman’s $2.82 billion estimate. However, EPS of $1.11 beat Bachman’s estimates of $1.00. Additionally, the analyst maintained a Market Perform rating on Computer Sciences shares, with a $72 price target, which represents a potential upside of 9.5% from where the stock is currently trading.

Bachman noted, “We are raising our valuation on the Commercial segment slightly, largely due to positive momentum along next-generation offerings, although we are lowering our margin Commercial estimates slightly. CSC’s commentary that these products are beginning to offset legacy products gives us comfort that revs and bookings could grow in FY2017. In addition, we also think that M&A transactions announced today will also help Commercial revenues in 2H FY2016. Similar to IBM, we do not think these deals will move the needle, but we applaud steps to gain competencies in high growth areas.”

Out of the 7 analysts polled by TipRanks, 5 rate Computer Sciences Corp. stock a Hold, while 2 rate the stock a Buy. With a return potential of 8.5%, the stock’s consensus target price stands at $71.33. 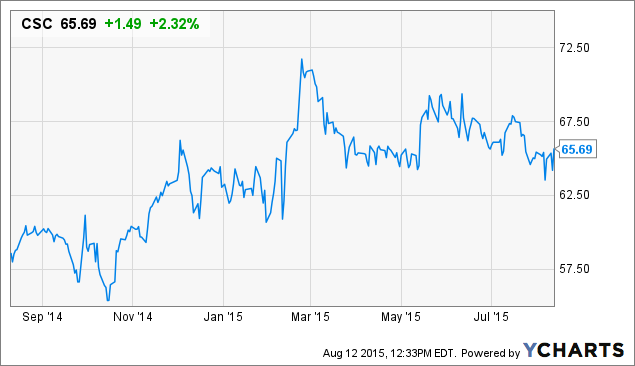 Computer Sciences Corporation (CSC): When All Else Fails, Split