Blueprint Medicines Corp (NASDAQ:BPMC) has been reiterated as an Outperform at Wedbush by research analyst David Nierengarten in a recent report released yesterday. The analyst maintained a price target of $41 per share, representing an upside of 31% from current levels. The report follows the news that the FDA has accepted the Company’s Investigational New Drug (IND) applications to begin Phase 1 clinical trials for its two lead drug candidates: BLU-554 for the treatment of advanced hepatocellular carcinoma (HCC) and cholangiocarcinoma, and BLU-285 for unresectable, treatment-resistant gastrointestinal stromal tumor (GIST).

Nierengarten noted, “BPMC will initially test safety and tolerability in a dose-finding Ph 1. In the expansion cohort, HCC and cholangiocarcinoma patients will be selected for FGF19 expression and stratified according to FGF1 9 amplification status. We expect the expansion cohort to being early 2016 and data to begin to be available mid:16.” Furthermore, “BPMC will begin a dose-finding Ph 1 trial in GIST patients, who will be tested retrospectively for KIT Exon 17 and PDGFRα D842V mutation status. In the expansion cohort, relapsed GIST patients carrying the PDGFRα D842V mutation and KIT Exon 17 mutations will be selected.”

The analyst continued, “The company also reiterated they expect the IND for BLU-285 in systemic mastocytosis (SM) patients to be filed soon. Imatinib is the only currently approved drug for SM, but is ineffective in the ~94% of patients harboring a KIT Exon 17- mutation. In the Ph 1, we expect advanced SM patients to be retrospectively tested for KIT Exon 17 mutation status during a dose-escalation portion, with expansion cohorts for sub-type specific SM patients to be opened in 2016.” 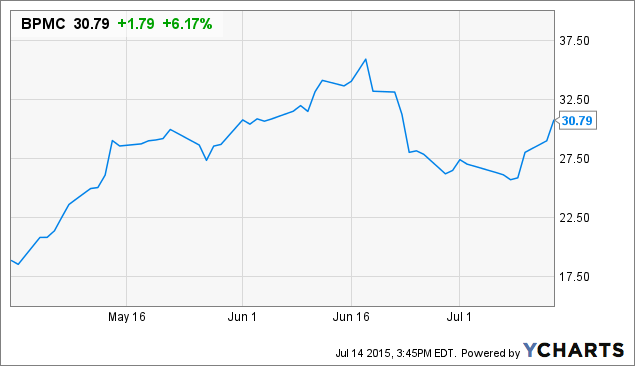 Blueprint Medicines Corp (BPMC) IPO: Early For Stamp Of Approval, But Goldman Sachs Could Power It Up