Blackberry: We Prefer To Stay On The Sidelines For Now, Says William Blair

Doradla wrote, “The pro forma results exclude a $167 million noncash accounting loss on the value of the company’s convertible debt and a pretax restructuring charge of $33 million. Upside in the quarter was driven by improvements in gross margin, which management attributed to sales mix and improvements in manufacturing-related fixed costs, as well as lower-than- anticipated operating expenses driven by the company’s continued focus on cost reduction. Although revenue fell short of Street expectations, BlackBerry’s hardware division turned in a non-GAAP gross profit for the first time in five quarters, largely because of increased volumes as the company recognized revenue on 2.1 million smartphone devices (up from 1.6 million last quarter), topping both our and Street expectations of 1.6 million and 1.7 million, respectively. Pro forma gross margin of 47.5% exceeded our estimate by 150 basis points as increased shipments and reductions in fixed manufacturing costs more than offset the decline in ASP during the quarter.”

The analyst continued, “Chief Executive Officer John S. Chen’s renewed emphasis on regulated industries (which have historically been Blackberry’s strength) is perhaps the best possible direction for a company that has few viable options. In that context, Blackberry’s launch of the Passport may be viewed as the company’s attempt to offer a better customer experience with integrated hardware/software platforms. Within the mobile handset industry, other than Apple, no other handset vendor offers its own operating system; the majority of the industry depends on Google’s Android. Under Mr. Chen’s leadership, BlackBerry has made significant changes to its cost structure and cash flow management, and as highlighted in its earnings call, the company is transitioning toward a subscription-based revenue model for its software. While these are small steps in the right direction, we are still unable to reconcile the company’s longer-term growth trajectory and believe the company continues to face an uphill battle. A combination of BYOD trends at the enterprise level, the partnership between IBM and Apple, and the importance of a robust app store are but a few competitive dynamics that that will keep the competitive pressures on the company. In sum, given the continued uncertainties in the comeback story, we prefer to stay on the sidelines for now and believe investing new money in the name is somewhat speculative at this point.”

According to TipRanks.com, which measures analysts’ and bloggers’ success rate based on how their calls perform, analyst Anil Doradla has a total average return of 4.6% and a 50% success rate. Doradla is ranked #1434 out of 3324 analysts. 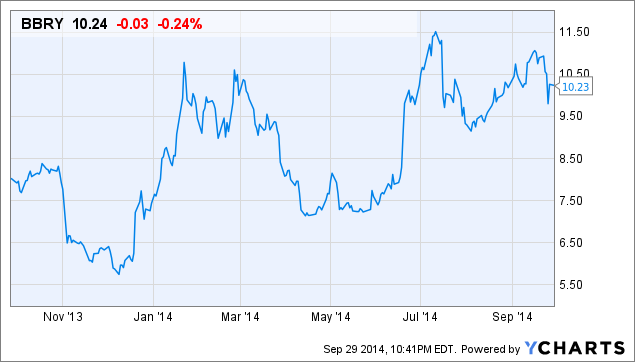