BlackBerry Ltd (NASDAQ:BBRY) shares are down 1.14% today to $8.72, adding to their 4.5% decline yesterday, after the company reported weak fiscal first-quarter results with sales and pro forma EPS below consensus estimates. Subsequently, analysts of Oppenheimer and Canaccord weighed in with a few insights on the results.

Oppenheimer analyst Andrew Uerkwitz reiterated a Perform rating on BBRY, while no price target was provided.

Uerkwitz noted, “BlackBerry reported F1Q16 revs/non-GAAP EPS of $658M/-$0.05, below consensus $682M/-$0.03 but above our $590M/-$0.13. BBRY’s F1Q16 handset unit sales were in line with our bearish view; however, better than expected ASP and strong software revenues (led by licensing!) contributed to better-than-expected results. BBRY reiterated its focus on profitability and cautious optimism. BBRY continues to cut costs in its handset business, but we now think it faces irreversible deterioration.”

The analyst concluded, “We believe BlackBerry has executed well to grow its Software revenues from core enterprise customers and tuck-in acquisitions. However, we believe a turnaround in the Device business will prove to be difficult.”

Canaccord analyst Michael Walkley reiterated a Hold rating on BBRY, while reducing the price target to $8.00 (from $10.00).

Furthermore, “Based on management’s FY16 growth expectations for the core EMM business, we believe BlackBerry faces the challenging task of selling not just EMM subscriptions but must also upsell increasing amounts of VAS and close additional technology licensing deals to meet its lowered FY16 targets. Further, we believe the continued steep decline in high margin services business and ongoing tepid hardware sales will remain a headwind to meaningful profitability during FY16/FY17.”

Out of the 28 analysts polled by TipRanks, 3 rate BlackBerry stock a Buy, 18 rate the stock a Hold and 7 recommend Sell. With a return potential of 9.3%, the stock’s consensus target price stands at $9.60. 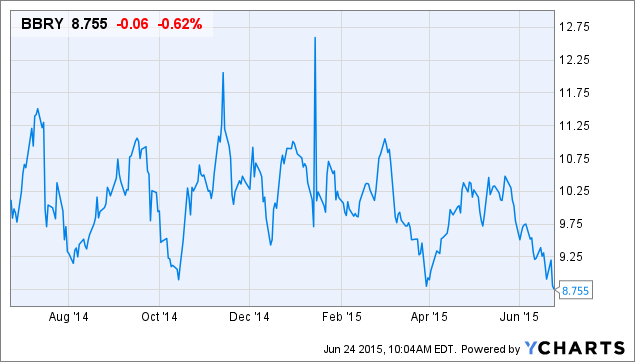