BioLineRx Ltd. (BLRX) today announced it received a Notice of Allowance of US patent for its Celiac disease candidate drug, BL-7010. The patent covers the use of BL-7010 to protect the gastrointestinal mucosa from gluten. Upon issuing, this patent will be valid until 2026.

In reaction, Roth Capital analyst Joseph Pantginis today reiterated coverage on BLRX with a Buy rating and an $8.00 price target.

Pantginis noted, “This notice expands the US IP coverage of BL-7010 to include method of use in addition to composition of matter and therefore signifies a positive incremental milestone for this candidate product. The company is currently in the final stages of their Phase I/II study of BL-7010, which will determine the dose for the next clinical stage study. Recall that unblinded data from this study, released in July 2014, showed a good tolerability and safety profile for the drug. BL-7010 showed some GI events, despite the events not being considered serious or dose limiting. No DLTs were found in the study. Additionally, no systemic exposure in plasma and urine in any of the tested groups (single or repeated administration regimens). This supports the the medical device classification of BL-7010 in Europe, which could significantly reduce costs and time to market. The study is now focused on the repeated administration regimen in a lower dose range that BLRX believes reflects an optimal therapeutic dose range. Data from this last part of the study is expected in 4Q14.”

The analyst added, “Our target is based on what we believe are conservative numbers and probabilities of success, and we see significant potential upside in this name.” 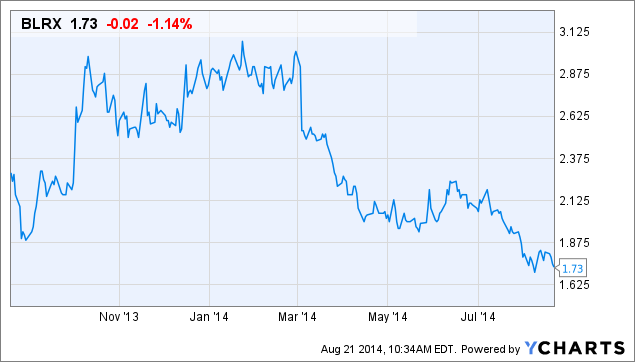