Before The Bell: Needham Reiterates Buy On Gilead Sciences, Inc. Due To Strong 1Q15 HCV Sales

Gilead Sciences, Inc. (NASDAQ:GILD) has been reiterated as a Buy at Needham by research analyst Alan Carr in a recent report released today. The analyst maintained a price target of $120 per share, representing an upside of 19% over the closing stock price. The report comes after the company released its first-quarter earnings results, posting $7.41 billion in product sales, compared to Carr’s $7.12 billion estimate.

Carr noted, “Strong performance was driven by $3.58B from HCV drug Harvoni. Total revenues were $7.59B, compared to our $7.33B and consensus $6.80B estimates. Mgmt raised product sales guidance to $28-29B (was $26-27B). All other guidance was left unchanged. Non-GAAP EPS of $2.94 exceeded our $2.34 and consensus $2.29 expectations. EPS was favorably impacted by an adjustment for Branded Prescription Drug Fee.” Furthermore, “We expect additional Harvoni penetration in EU this year as well as approval in Japan in mid-2015.”

The analyst continued, “Top-line results from Phase 3 ASTRAL program testing 12-wk sof/ GS-5816 are expected in 3Q15, followed by NDA submission in 4Q15. Gilead reported initial results from a 3-drug single-tablet regimen containing sof/ GS-5816/ GS-9857 at the EASL mtg last week. The company will further explore 6, 8, and 12-wk regimens in Phase 2 trials. The regimen was ineffective over 4-wks. We believe there remains an opportunity for competitors in this space” 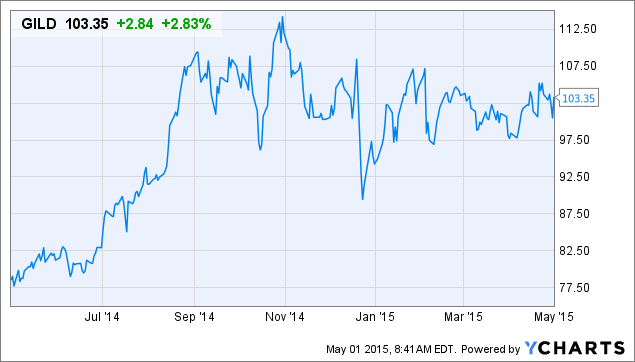