In a research report released this morning, Needham analyst Rajvindra Gill reiterated a Buy rating on Micron Technology, Inc. (NASDAQ:MU), while reducing the price target to $40 (from $50), which represents a potential upside of 63% from Wednesday’s closing price. The decreased price target comes in response to weakness in the PC segment.

Gill commented: “PC OEMs are sitting on excess inventory, which will further put pressure on PC DRAM pricing. As a result, we are reducing our ests over the next 3 quarters and adjusting our FY16 / FY17 ests. Despite the NT PC impact, we believe demand bit growth will outstrip supply bit growth in CY16, which should stabilize pricing. Unlike SNDK, which is undergoing several structural challenges, we believe the weakness in MU’s stock has been macro/PC related rather than structural in nature.”

The analyst continued, “We see several catalysts in place to drive MU’s GM% higher over the next several quarters. Despite our estimate cuts, we believe the stock remains egregiously inexpensive at 7x P/E our updated FY16 EPS ests (vs SNDK at 16.2x) and would be buyers on any weakness.”

According to TipRanks.com, which measures analysts’ and bloggers’ success rate based on how their calls perform, analyst Rajvindra Gill has a total average return of 24.3% and a 65.5% success rate. Gill has a -6.2% average return when recommending MU, and is ranked #32 out of 3640 analysts.

Out of the 29 analysts polled by TipRanks, 22 rate Micron Technology stock a Buy, 6 rate the stock a Hold and whereas only one recommends to Sell. With a return potential of 56.6%, the stock’s consensus target price stands at $38.35. 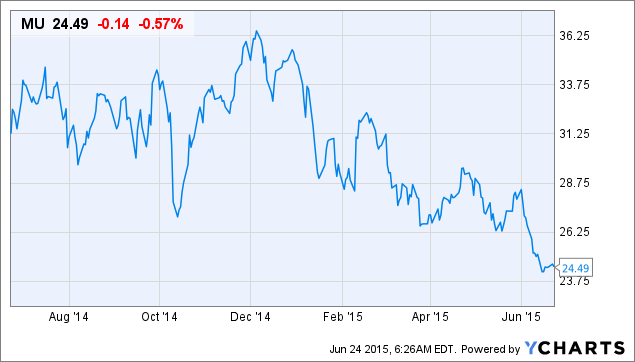