In a research note released today, Barclays analyst Meredith Adler maintained coverage on Wal-Mart Stores (WMT) shares, with an Overweight rating and an $84 price target. The report follows the company’s second-quarter fiscal 2015 results, showing EPS of $1.21, in line with consensus and Adler’s estimate. Walmart US comps were flat, slightly below Adler’s +0.3% estimate.

Adler wrote, “Walmart’s new CEO Doug McMillon discussed a transformation process underway in many areas of the business, ranging from improving the customer experience in the U.S. stores to improving the quality/value of merchandise at Sam’s Club to stabilizing performance (and slowing growth) in many international markets to integrating ecommerce and physical retail more closely. We think these efforts will put the company on the right track, but it is too early to say how easy it will be to execute; 2Q15 results seem to confirm that benefits are still to come. There is also a new leader at the company’s largest business, Walmart US, and Greg Foran will have the flexibility to make additional changes, with growth plans being one potential area of change. In our view, there is no doubt he will remain committed to WMT’s everyday low-price strategy and its efforts, such as ‘Savings Catcher’. He is also likely to keep the strategy focused on improving in-stock positions, localizing the assortment, improving checkout speeds, and re-designing the electronics and sporting goods departments.”

The analyst continued, “The company is also dealing with a 50% increase in healthcare costs vs. its original plans and investing more in technology, talent and fulfilment for ecommerce. These headwinds caused WMT to lower FY15 EPS guidance by $0.25 at the midpoint (now $4.90-$5.15), with most of the drop coming in 4Q15, a result in part of many new store openings at the very end of the year. The headwind from healthcare should be mostly cycled next year, but we suspect the ecommerce investments will continue for awhile.” 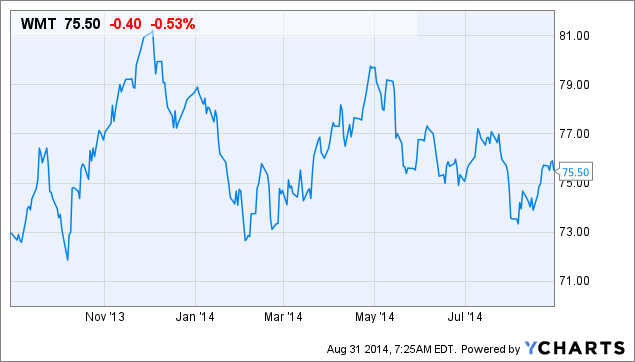