MLV & Co. analyst Carter Driscoll was out today with some bullish comments on Ballard Power Systems (NASDAQ:BLDP), following this morning’s news of 2-year extension of the company’s existing engineering services contract with Volkswagen valued at C$30-50M (US$24-40M). The company also announced the sale/transfer of automotive-related intellectual property (IP) to Volkswagen for ~$50M.

The analyst raised the price target on Ballard shares to $3 (from $2.50) and reiterated a Buy rating. The new price target implies an upside of 19.5% from current levels.

Driscoll wrote, “First, we view the transaction as strengthening the ties between the two companies. Second, the payment should offset any concerns about BLDP’s cash position. BLDP is still finalizing the terms of the deal but expects to book the majority of the payment in 1Q15, which may be in the form of high-margin revenue (less 25% royalty payment to United Technologies). Third, the extension on the contract provides greater revenue stability as Volkswagen has contributed ~$20M annually since the contract began. Fourth, if Volkswagen commercializes a fuel cell electric vehicle (FCEV), BLDP would likely be in position to become a component supplier.”

The analyst concluded, “We believe this deal is evidence that last year’s acquisition of UTX’s patent portfolio is beginning to pay off, one of the key reasons for our BUY rating. As a result of our expectation for greater revenue stability, potential future revenue growth and the positive impact to the balance sheet we are raising our PT to $3.00.” 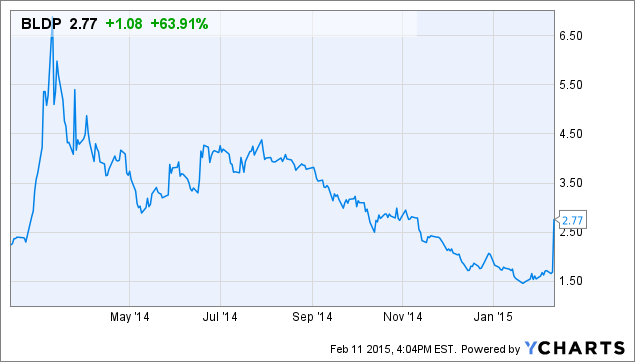