Axiom Weighs In On Yahoo! Inc. Ahead Of Tonight’s Earnings Report

Yahoo! Inc. (NASDAQ:YHOO) shares are trading almost flat at $39.67 ahead of its second-quarter earnings results, which will be released tonight after the market close. Subsequently, Axiom analyst Victor Anthony is weighing in with his prediction. Overall, the analyst is expecting an in-line quarter and he believes that buy-side expectations are for an in-line quarter as well.

The analyst slightly reduced the price target to $50 (from $51), while reiterating a Buy rating on Yahoo stock. The new price target represents a potential upside of 26% from where YHOO is currently trading. The decreased price target comes as a result of Alibaba’s lower valuation.

Anthony wrote, “Upward performance of the stock is predicated on Yahoo obtaining a favorable tax ruling from the IRS for Aabaco Holdings (name of the spinoff), performance of Alibaba’s share price, and improvements in the core, with the former carrying the most weight, given that the market is currently pricing in an unfavorable ruling. Investors will be looking for confidence from management in its ability to secure a favorable IRS ruling, as well as the timing of such a ruling, plus clarity on M&A post the spin.”

The analyst added, “2Q15 results should show continued improvements in investment areas of mobile, video, native and social, and sequential expense leverage, but are unlikely to show overall core improvement as the PC business remains under pressure due to pressures on premium display. Our valuation assumes Yahoo receives a favorable IRS ruling.” 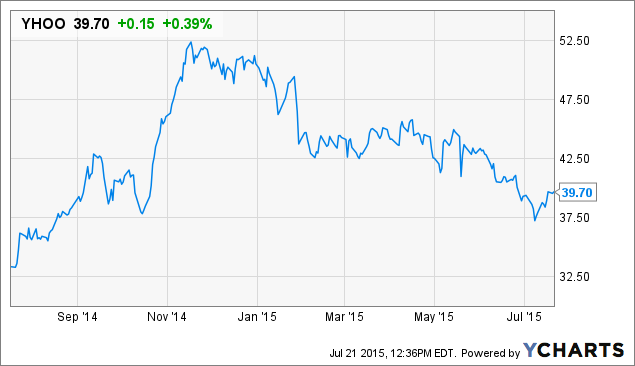