In a research report released Tuesday, Axiom analyst Victor Anthony reiterated a Hold rating on shares of Pandora Media Inc (NYSE:P), while raising the price target to $20 (from $18), after the Copyright Royalty Board has affirmed the use of the company’s deal with Merlin as a valid benchmark for broader recording royalty rates.

Anthony noted, “Rate outcome depends on how much weight the judges apply to the Merlin (& Naxos) benchmarks vs. others. From our reading of the 15-page document, that remains unclear to us. Clearly the judges thought the Merlin agreement, which has rates (11 .9c-13c per 100 ad-supported spins) below the current rate, was an important consideration, but there are other submitted benchmarks that are higher, and some lower (iHeartRadio at 5c per 100 spins). Given all publicly available information, it is impossible to know what weight the judges will apply to the Merlin rates. However, we admit that the inclusion of the Merlin rates reduces the likelihood of a severe, assetimpairing outcome.”

“We have increased the target multiples in our valuation of the shares and raised our price target to $20 from $18 for year-end 2015. Our price target is based on an average of our EV/EBITDA-based valuation method, which yields $20, and our NonGAAP P/E-based valuation method, which also yields $20. Next key date is October 12 when the Copyright Register is set to issue an opinion to the CRB on whether they can set different rates for different music licensors (etc. majors vs. independents). The reason for this is unclear,” the analyst continued. 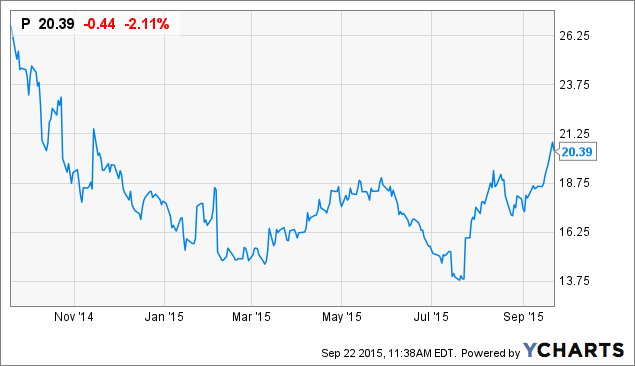