Axiom analyst Gordon Johnson was out today with some bearish comments on First Solar (FSLR), reiterating his Sell rating and reducing his price target to $28 price (from $29), ahead of FSLR’s second quarter earnings results.

Johnson commented: “Why the pessimism? Well, just as the Street has FSLR’s rev/EPS figures collapsing from $950mn/$1.10, respectively, in C1Q14, to just $795mn/$0.32 in C2Q14 (due to the fact that FSLR closed the sale of its Campo Verde project in C1Q14, for which nearly 100% of the project construction was complete, meaning FSLR could recognize all of the associated rev & 100%-gross-margin-develop-fee-rev in C1Q14, yet will not have this benefit in C2Q14), we see FSLR fully exhausting its company-owned projects by C1Q16; when this happens, which we see as inevitable, we see FSLR’s rev/margins/earnings moving considerably lower. This is the risk we feel FSLR’s stock, sitting at $62.03/shr (15x/46x our 2015/2016 EPS ests), is ignoring. As investors better appreciate this forthcoming headwind, which could conceivably happen at any time, we see considerable downside to FSLR’s stock”. 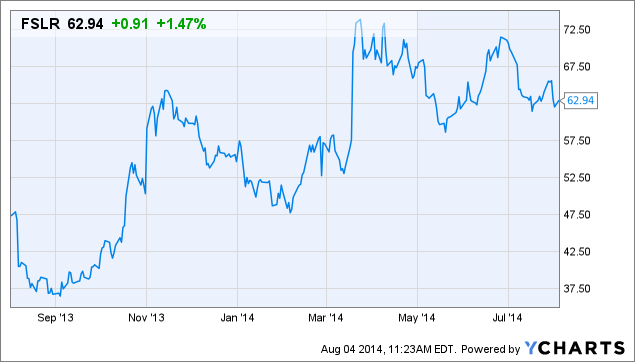