Koenig wrote, “The company saw double-digit growth in all geographies, which led to a $35M revenue beat and a guidance raise of almost $70M. We think the primary factor was frenetic license upgrade activity in advance of ADSK’s planned termination of license upgrades in February CY15, but strength in suites, the continuing adoption of building information management (BIM) technology, and cyclical recovery in AEC also helped. Billings growth (+27% Y/Y) was even stronger than revenue growth (+13%), due to strong attach rates for maintenance contracts and the deferral of $10M of enterprise licensing activity under ADSK’s new flexible terms.”

The analyst added, “We think ADSK has plenty of levers to drive desktop and cloud subscriptions in FY17 and FY18, but we would like to hear more about ADSK’s plans for FY16, which hopefully will be forthcoming at its Oct. 1 investor event. Still, as long as cyclical recovery (especially in AEC) remains intact and valuation remains reasonable (ADSK trades at a 21x EV/FCF on our CY15 estimates), we think investors are likely to see reasonably good 12-month upside. We remain watchful of conditions in Europe, but recent macro data points aren’t enough to make us want to jump from the ADSK train.” 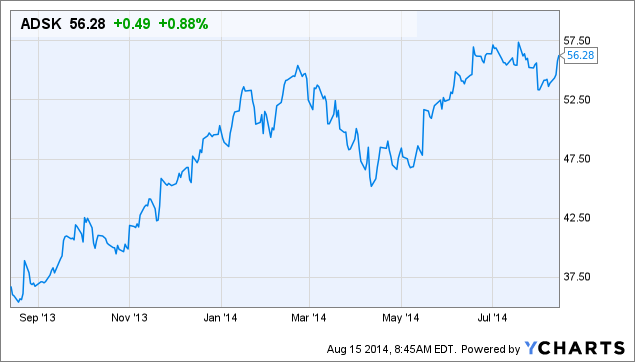