In a research report sent to investors, William Blair analyst Jim Breen maintained a Market Perform rating on AT&T Inc (NYSE:T), following the company’s fourth-quarter results, posting revenue of $34.4 billion that was in line with consensus of $34.3 billion and was up 3.8% compared with last year. No price target was provided.

Breen wrote, “The fourth-quarter results reflect the intense competitive environment in the U.S. wireless industry and the shift away from subsidizing handsets. Consolidated EBITDA were up slightly compared with the fourth quarter of last year, and were negatively affected by promotions and smartphone additions. However, there are signs of optimism. Management guided its 2015 consolidated EBITDA margin and its wireless EBITDA margin to increase compared with 2014. We view flat to slightly higher margins as achievable, since more than half of the postpaid base is already on lower-priced nonsubsidy service plans. Continued pressure from the migration of an additional 25% of the postpaid base will likely be offset by customers upgrading to larger data buckets that are high margin.

The analyst concluded, “We maintain our Market Perform rating on shares as we believe that competitive pressure and industry maturation will limit upside over the long term, despite positive developments this quarter. AT&T shares trade at 6.0 times our estimate of 2015 EBITDA versus Verizon (NYSE:VZ) at 6.4 times. We believe shares are appropriately valued and we therefore reiterate our Market Perform rating.” 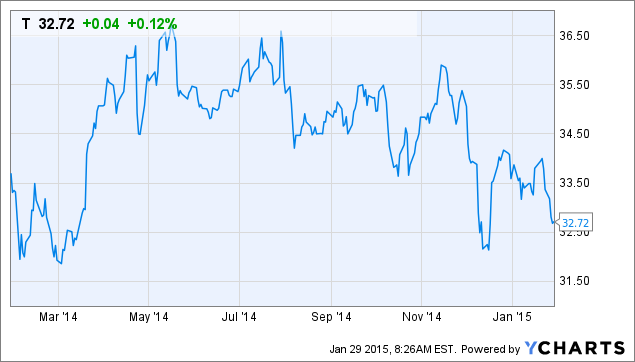