In a research report issued today, Feltl and Company analyst Jeffrey Schreiner reiterated a Hold rating on Atmel Corp. (NASDAQ:ATML) with a price target of $7.00, ahead of the company’s third-quarter earnings, which will be reported on Wednesday, October 29, after the market close.

Schreiner wrote, “During 1H14 ATML has enjoyed growth in its largest product segment (Microcontrollers (MCU), and leading end market (Industrial), allowing for y-y revenue growth. During its 3Q we believe ATML likely saw a slowing of prior growth catalysts, as opportunities in touch diminished, while leading competitor MCHP warned due to slower growth in China. ATML’s 2Q revenue reflected ~57% of revenue from Europe/China, both leading geographies for industrial end markets. Gains in 8-bit MCUs, serving primarily industrial markets, was a key driver of 1H growth, given MCHP commentary, it seems there may be a high probability that prior industrial growth is likely to slow. Within touch ATML missed the 2H smartphone product cycle, has seen share loss within tablets, and now touch penetration in notebooks is reversing as OEMs take touch out. Given headwinds, we believe touch revenues could be down double-digit sequentially, with overall MCU flat, supported by ~$7m in revenues from recent NMI acquisition. We have reduced 3Q revenue estimates to ~$365m, down from ~$375m. Due to slightly higher estimated OPEX (~$123m), and lowered revenue outlook, our forecasted 3Q non-GAAP EPS estimate moves lower to ~$0.11 vs. ~$0.12 previously.”

The analyst concluded, “We believe near-term growth catalysts have potentially slowed, while valuation multiples have contracted. We recommend investors remain on the sidelines until near-term growth headwinds are addressed, and longer-term opportunities are more in focus.” 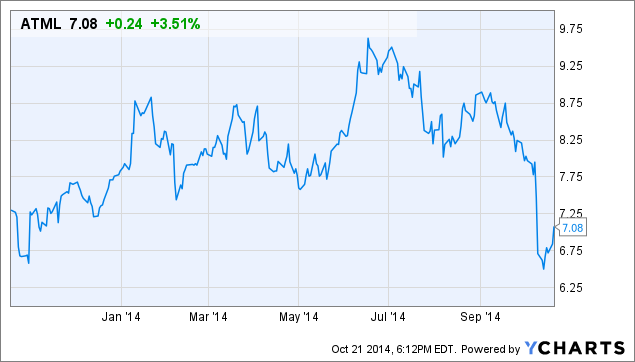