Davis noted, “It’s rare that AZPN shares go “on sale,” but with last week’s 7% post Q4/14 sell off, we believe we’re at a reasonably compelling entry point. We heard a few recurring pushbacks off of the print – LTCV growth was a two-year low, annual spend decelerated sequentially (back to normal levels), and the FCF guide implies high- single-digit growth – but our response and long-standing opinion have been steadfast: AZPN has one of the most defensible franchises in all of software, and the firm should continue to be a low-double-digit organic grower with operating margins that expand to at least 45%+, which should result in predictable, 15-20% tax-adjusted earnings growth.” And concludes: “With the stock trading at 18x our C2015 FCF/share estimate, or basically a 1.0x PE/G, we think this is an attractive price for long-term holders to get involved.” 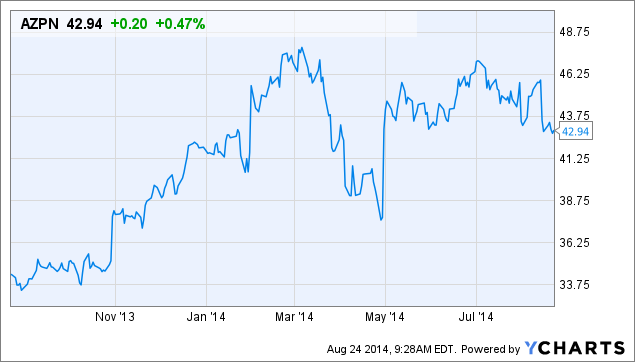