In reaction, Piper Jaffray analyst Erinn Murphy joined the bearish conversation, downgrading Under Armour shares from Overweight to Neutral, while slashing the price target to $17 (from $41).

Murphy commented, “While we do not like being an “after the fact” downgrade, we can simply not support the purchase of UAA shares following the severe miss and guide down which was accompanied by the CFO, Chip Molloy, leaving. To wit, Q4 sales were up 12% missing our 20% estimate and EPS was $0.23, a slight miss to our $0.25 estimate. In addition to lackluster revenue growth which was a result of significantly slower NA revenue, gross margins under performed meaningfully–down 320 bps.”

“In tandem with the Q4 release, we are lowering our outlook on UAA shares. We simply cannot support the purchase of the stock on weakness given the lack of visibility going forward–particularly with CFO Chip Molloy leaving the company just over a year after joining. We believe this further adds risk to the model. As such, we are lowering our FY17 EPS from $0.70 to $0.43 and our FY18 from $0.82 to $0.43. The concern we have is that earnings are not only slowing but declining,” the analyst concludes.

Out of the 33 analysts polled in the past 12 months, 13 rate Under Armour stock a Buy, 17 rate the stock a Hold and 3 recommend Sell. With a return potential of 96%, the stock’s consensus target price stands at $38.61. 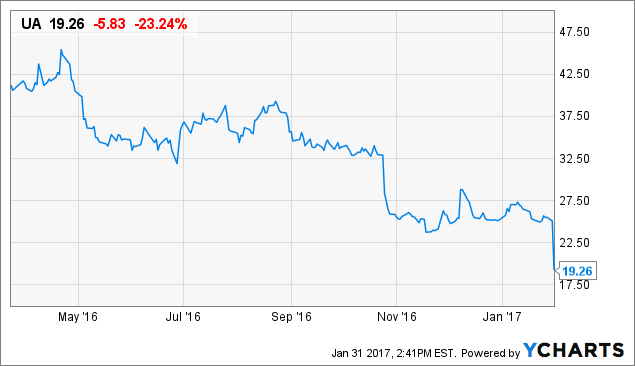