In a research report released today, Argus analysts David Ritter reiterated a Hold rating on Visa (NYSE:V), following the announcement of Apple’s new service Apple Pay, and ahead of Visa’s release of their own new service called Token Service. No price target was provided.

Ritter wrote, “Lost in all of the Apple Pay hysteria, the Merchant Customer Exchange (MCX) finally released some details about its own mobile payment system via a press release on September 3. MCX is a merchant consortium that represents about 25% of U.S. retail sales, and includes giants such as Wal-Mart, Target, Lowes, Kohl’s, and Best Buy. Of the MCX merchants, only CVS has thus far said that it will support Apple Pay. With regard to Visa, the key point is that MCX has promised to be a payments network for the merchant community. In its press release, MCX presented a variety of payment options (checking account draft, merchant gift cards, and select merchant- branded cards), but did not mention the major card networks. It seems unlikely that MCX will try to launch without the major card brands; however, we note that Target’s direct debit card (known as Red Card) has been a huge hit with customers (it offers 5% off all purchases), so anything is possible.” Ritter added, “Visa’s new tokenization service represents a potentially significant new revenue stream over the long term. In the near term, we’ve read that Visa plans to waive fees for the service through 2015.”

The analyst continued, “Visa shares nearly tripled in price from 2011 through 2013. However, the shares have traded roughly in line with the S&P  500 over the past year and have lagged the index for the past six months. Despite this pause, valuation metrics for V shares continue to appear stretched.  Twice this year, Visa has reduced its revenue guidance for fiscal 2014, so expectations appear to be low in the near term, and year-over-year comparisons get easier starting in the September quarter. However, geopolitical tensions have increased in recent months and present a risk to cross-border volume, which accounts for up to one-quarter of Visa’s revenue. While Visa has decided to continue to operate in Russia, that situation remains fluid and revenue from Russia (about 2% of Visa’s total) remains at risk as well.”

According to TipRanks.com, which measures analysts’ and bloggers’ success rate based on how their calls perform, analyst David Ritter has a total average return of 10.6% and a 77.3% success rate. Ritter  is ranked #761 out of 3298 analysts. 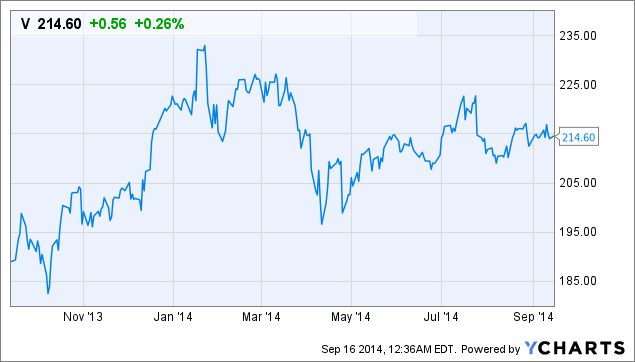