In a research report released today, Argus analyst David Ritter reiterated a Hold rating on Mastercard (NYSE:MA), following MA’s minor share decline over the past six months versus about a 7% gain for the S&P 500. No price target was assigned.

Ritter wrote, “MA shares have declined slightly over the past six months versus about a 7% gain for the S&P 500. The MA gained nearly 400% from 2011 through 2013. Despite the modest recent retreat, valuation metrics still appear stretched. We had raised our EPS estimates and target price on several occasions during the past four years. However, consensus estimates and our estimates have been fairly steady in recent months.” He continued, “MasterCard’s management team has done an excellent job at setting conservative guidance and then exceeding it. Management continues to expect a 20%+ EPS CAGR over the 2013-2015 time period, despite negative impacts from Russia, European legislation and the Chase de-conversion.”

The analyst concluded, “In any event, we continue to like the MA story and its management team for the long haul. We will look to get MA
back on the BUY list on a pullback and/or a significant increase in our earnings estimates. At 21-times the 2015
consensus, MA appears fully valued.”

According to TipRanks.com, which measures analysts’ and bloggers’ success rate based on how their calls perform, analyst David Ritter has a total average return of 9.9% and an 82.6% success rate. Ritter is ranked #743 out of 3311 analysts. 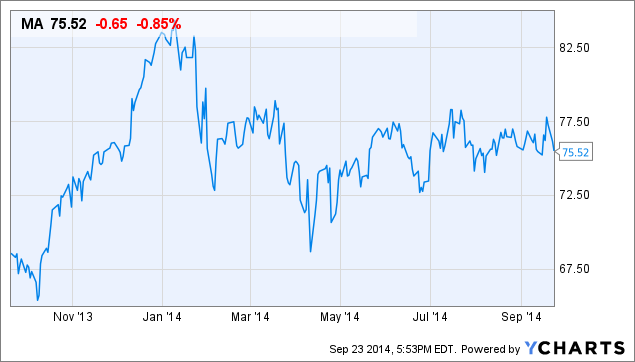