Argus Reiterates Buy On Sandisk, Sees 13% Upside For The Stock

In a research note published today, Argus analyst Jim Kelleher reiterated a Buy rating on Sandisk (NASDAQ:SNDK) with a $112 price target, which represents a 13% upside from where the stock is currently trading.

Kelleher wrote, “SanDisk Corp should continue to benefit from robust NAND demand for multiple applications. In July, SanDisk guided bit growth toward the low end of its guidance range and expressed caution related to capacity constraints. Nonetheless, SanDisk is positioned for continued rising revenue and EPS based on positive demand and pricing trends.  Partner Toshiba, which shares production facilities with SanDisk, recently increased its outlook for its Electronic Devices & Components business, based on broad improvement in NAND demand. The iPhone 6, which contains SanDisk NAND memory chips, is enjoying huge demand. While the Ultrabook market never took off, demand for client SSDs continues to accelerate based on the success of two-in-ones. We expect the “fan-less” design for devices using the new Intel Core M chip will further drive rising SSD and NAND demand. One of the strongest growth channels for NAND is the cloud service provider market, and we expect NAND content to grow in enterprise environments faster than in consumer products.  Even amid periodic episodes of supply-demand imbalance, we believe that long-term demand remains robust for NAND and that pricing will remain generally favorable. The 4G ramp in the Chinese smartphone market; continued growth in flash demand from cloud-service data farms; and ongoing though uneven transition away from HDDs and toward SSDs in client (PC) and server markets should also benefit earnings.  We think forecasts issued late in 2013 for NAND demand, which called for low-teens growth in 2014, are too conservative. At the same time, additions to industry capacity remain rational. We believe currency issues are manageable for SanDisk. The SNDK shares have backed down by $10 from their all-time high near $109 and appear attractive at current levels.”

The analyst continued, “SanDisk is positioned for continued rising revenue and EPS based on positive demand and pricing trends. On 9/18/14, foundry partner Toshiba, which shares production facilities with SanDisk, held its annual investor day and pointed to a more favorable NAND demand environment. In its investor slide deck, Toshiba’s Electronic Devices & Components (EDC) segment is expected to benefit from strong overall NAND demand, which the company called “strong.” NAND sales volume is higher than Toshiba had previously modeled, and NAND demand for SSDs is picking up smoothly.”

According to Tipranks.com, which measures analysts’ and bloggers’ success rate based on how their calls perform, analyst Jim Kelleher has a total average return of 16% and an 74% success rate. Kelleher is ranked #232 out of 3311 analysts. 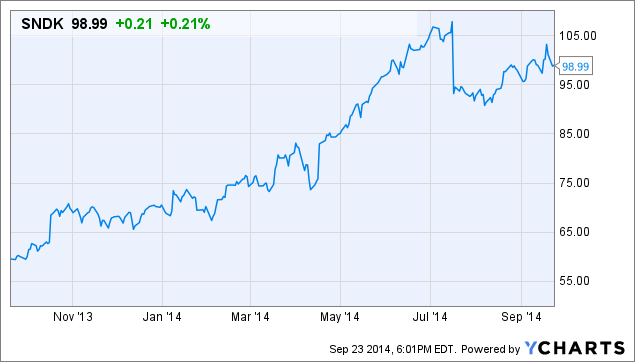