Bonner wrote, “Mr. Claure, who took the helm on August 11, has killed off Sprint’s “Family Plan” and related advertising campaign. He has also noted that the company’s wireless plans are both confusing and more expensive than those of competitors. His strategy is to simplify Sprint’s plans and become more competitive on price. For now though, Sprint just seems to be mirroring the offers of its rivals. Following T-Mobile, it recently offered to match the handset trade-in value offered by competitors. It has also fashioned its family data-sharing plan on those of Verizon and AT&T. In addition, it has offered a special discount service rate for the iPhone 6.  While it is still early days on Mr. Claure’s changes, we like the idea that Sprint is becoming more competitively focused, even if it is simply copying the offers of other carriers.  While not directly ascribing his strategy to SoftBank CEO Masayoshi Son, Mr. Claure’s marching orders seem fairly clear. The critical point is to turn around subscriber acquisition, i.e., to sign up more customers than are leaving the service. Sprint lost 1.4 million customers in 1H14, and has been hemorrhaging subscribers for years.”

The analyst added, “Sprint has been in turnaround mode for more than four years, and while it has made strides in increasing profitability, it remains unclear whether it can transform its network fast enough to meet the challenge from industry leaders Verizon and AT&T, as well as from an energetically rejuvenated T-Mobile. T-Mobile recently boasted that it would surpass Sprint to become the third-largest U.S. wireless carrier by the end of 2014.  With its rumored bid for T-Mobile now dead, Sprint will have to create an organic turnaround, a significant challenge given white-hot competition and the commanding positions of industry leaders Verizon and AT&T. In addition, T-Mobile has appropriated the industry challenger mantle and will not give that up without a fight. Sprint is stuck in the middle, and is just beginning to recover from the dislocation caused by its Network Vision upgrade.  Sprint had been making progress in improving profitability, though we think that it will now have to sacrifice profits to win back subscribers with new discount service plans.” 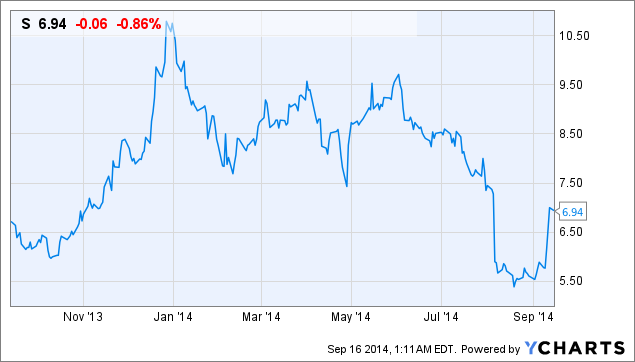