In a research report published Friday, Argus analyst Christopher Graja maintained a Buy rating on Costco (NASDAQ:COST) and increased his price target to $143 (from $130) as the company posted a 13% increase in its net income to $697 million.

Graja wrote, “We believe that Costco’s financial strength and ability to deliver extreme values are key differentiators for the stock in  the current market environment. Our analysis of core operations suggests that execution of the business plan remains excellent, with strong traffic and membership renewals.  Our BUY recommendation is consistent with our longstanding regard for steady-growth retailers with dominant market positions. Approximately 75% of the company’s FY14 operating income came from membership fees. This revenue stream adds stability to earnings, which stands out in the volatile retail sector. Costco remains one of our favorite merchants, and we think the company has one of the best management teams in all of retail.  We believe that the company’s constant effort to deliver low prices keeps it relevant at a time when shoppers are looking for online bargains. The fact that more than 50% of sales come from food and sundries also makes Costco less vulnerable to internet competition. Sales of fuel are also insulated from internet competition and Costco’s low prices help to drive store traffic and reinforce the value of membership. Strong traffic and a record 94.4% business renewal rate in North America illustrate the importance of Costco to paying members.  We expect continued sales and EPS growth given the company’s focus on innovation to maintain its competitive edge: selling products at lower prices.”

The analyst continued, “With customer checkout representing 70% of store labor, management is working on scanning options to reduce costs. The company is also filling prescriptions at a central location to lower costs, and has found that many shoppers don’t mind next-day pickup because they can save money on their medicine. The company is also emphasizing private brands, which represent 20% of sales and typically carry higher margins. Costco has the potential to raise private-brand penetration to 30% over the next 5-10 years.  In addition to making existing stores more productive, Costco is opening more of them. New store openings are likely to rise to approximately 31 in FY15 (representing 4.5%-5.0% square footage growth) from 30 stores in FY14, 26 in FY13 and 16 in FY12.  We are raising our 12-month target price from $130 to $143. This increase reflects an increase in our forward-four-quarter EBITDA estimate and marginally higher valuation multiples. Our target multiples are consistent with current trading levels. While we don’t generally like to increase target multiples, we believe that a slight premium to peer mass merchants is justified based on Costco’s very high levels of operating income from membership fees, record-high membership renewal rates, and increasing store traffic in a retail environment where traffic has steadily declined. We also believe that Costco deserves a slightly higher multiple because of its consistent growth, the success of its international expansion, and its high relevance to customers who are trying to save money.” 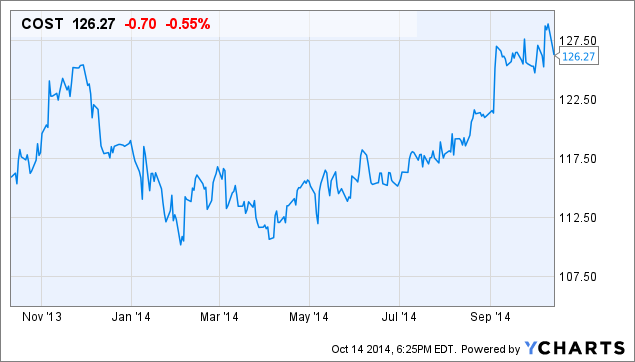