Doradla wrote, “We attended Apple’s product launch event in Cupertino yesterday where the company unveiled multiple new products. From our point of view, these products were not only impressive in terms of capabilities, but also have the potential of redefining the way we conduct our daily lives. As expected, the company announced two new flavors of the iPhone, the 4.7 inch iPhone6 and 5.5 inch iPhone6 plus. While these two devices were impressive on their own, the company’s foray into mobile payments and wearable devices may have won over even the toughest skeptics. On the mobile payments front, we believe the company made a major breakthrough and cracked an important and vexing issue that has plagued the industry for several years regarding customer ownership. On the Apple Watch front, we believe the company has laid the groundwork for a wearable device that has multiple compelling use-cases for an average consumer.

Bottom line, Apple has laid the foundations in two large and untapped markets (mobile payments and wearables) that have the potential of contributing multibillion-dollar opportunities over the next several years. On the smartphone front, we believe that market dynamics are evolving similar to the Apple’s impact on the PC market, with tighter software/hardware integration and innovative features enabling better pricing than the rest of the industry. Going forward, we believe even market leaders such as Samsung will find it increasingly difficult to compete against Apple. Stepping back, we believe these new product releases will help relieve the concerns that investors have had regarding Tim Cook’s ability to innovate and lead Apple post Steve Jobs. Below are some of the points that we believe were unique in yesterday’s product announcements.” 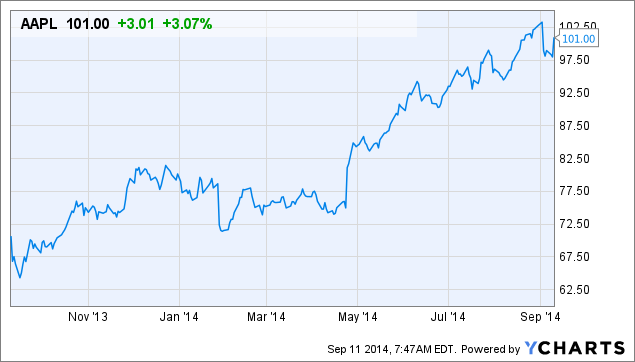