Piper Jaffray analyst Gene Munster has high hopes for Apple Inc. (NASDAQ:AAPL), as the countdown is on for the Apple Watch release date, which has officially been set for April 24 in select countries. With the start of Apple Watch availability approaching, the analyst believes that investors may begin to focus on opening weekend metrics.

Munster noted, "Apple may or may not release opening weekend sales figures for the Watch given that they are not reporting Watch numbers in quarterly results; however, we believe they may, at the least, give a sense for Watch sales when Apple reports earnings the following week. We expect Apple could generate 300k pre-orders in the first 24 hours and 1 million units in the first weekend. We also note that we expect 2.3 million units of the Watch in the Jun-15 quarter."

The analyst believes the company could reach 1 million Watches sold opening weekend (including pre-orders). 1 million total Watch units in opening weekend would imply an attach rate of less than 1% of total iPhone users (close to half a percent), according to Munster. He stated, "We believe given interest in the product and our prior survey work, a sub 1% attach rate in the opening weekend is realistic. One important dynamic for the Watch vs the iPhone opening weekend is that iPhone launches can benefit from channel fill as Apple sends units to channel partners (likely minimal for iPhone 6/6+ launch, but a factor in the iPhone 5S launch). The Watch will likely not benefit from channel fill given the limited distribution at launch.

The analyst reiterated an Overweight rating on Apple with a price target of $160, which represents a potential upside of 29% from where the stock is currently trading. 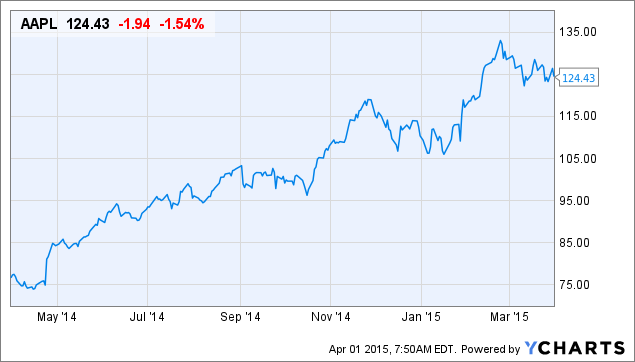