Apple Inc. (NASDAQ:AAPL) finally released its highly anticipated Apple Watch for presale on April 10th and sold out of all models in 6 hours. The company also offered a preview of the Apple Watch before it officially goes on sale on April 24th, though most of the people who pre-ordered seemed to have purchased the watch without seeing it in person first.

Cantor analyst Brian White has high hopes for Apple, reiterating a Buy rating on the stock, with a price target of $180, which represents a potential upside of 40% from where the stock is currently trading.

In his today’s research note, Mr. Mahaney wrote, “In our view, Apple Watch has gotten off to a strong start, with pre-orders beginning last Friday and shipment times stretched out until June for most models in the U.S. market. Although Apple generally experiences supply constraints with new product launches, we doubt the company was targeting shipment times stretching out into June so early in the pre-order process.”

Mr. White further commented, “Given Apple’s powerful iPhone cycle, the momentum we see around the iPhone in China during our recent China/Taiwan Tech Tour, and the launch of Apple Watch, we believe there is still plenty to look forward to at Apple during this transformational cycle. At the same time, we believe Apple’s valuation has room to expand from depressed levels (i.e., 10.5x our CY:16 EPS estimate, ex-cash).” Additionally, Piper Jaffray analyst Gene Munster weighed in today with a few insights on Apple, following the presale fiasco of last week. Munster wrote, “This weekend, we monitored Apple Watch lead-times for all 38 SKUs and found leadtimes were unchanged from 2 PM PT on Friday to our last check at 5 PM PT Sunday. Of the 38 versions, 30 quoted a June ship date, 6 quoted 4-6 weeks, and 2 quoted July.”

Furthermore, “Our take away from the unchanged lead-times is that Apple is likely expecting a ramp in production in mid-May to June. Overall we view the trends over the weekend as an indication of solid demand paired with very limited supply, with supply being the most significant limiting factor.” 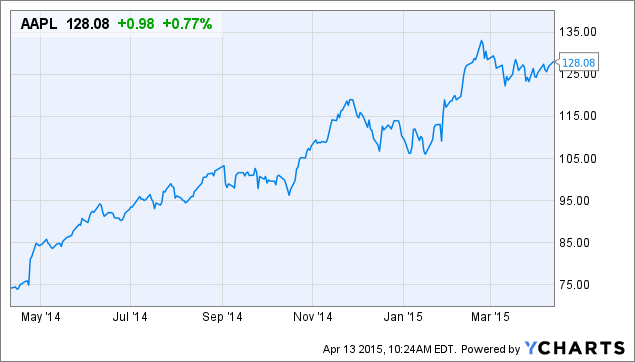