Ives wrote, “To this point, based on our bottom-up analysis on the China market opportunity for Apple, we estimate that China will overtake the Americas as the company’s top geographic region by revenue in FY17 given our expectations for continued iPhone share gains among Chinese consumers/enterprises, with the broader Apple ecosystem of devices/services also representing a major cross-sell opportunity.”

“Management has previously indicated looking to approximately double its stores in China to 40 by mid 2016, while channel investments to broaden distribution with more hiring and strong partnerships should also add more fuel to the fire. Apple has clearly ramped China revenue, and we believe it is poised to capitalize on what we estimate is over a $150 billion TAM from China smartphone shipments over the next few years, with the potential for solid upside to Street numbers in the next few quarters coming from strength from the new iPhone 6/6 Plus, Apps Store, and Apple Watch, in our opinion.”, the analyst added.

The analyst believes that Apple’s growth story around China is still under-appreciated by the Street as the sustainability of iPhone growth in the region remains a debatable issue. Ives anticipates that Apple can capitalize on its current “white-hot momentum” in the region and penetrate further into the country with its strong product ecosystem and secular tailwinds front and center.

The analyst reiterated an Outperform rating on the stock with a price target of $185, which represents a potential upside of 44% from where the stock is currently trading.

According to TipRanks.com, which measures analysts’ and bloggers’ success rate based on how their calls perform, analyst Daniel Ives has a total average return of 9.5% and a 69.2% success rate. Ives has a 1.8% average return when recommending AAPL, and is ranked #365 out of 3604 analysts. 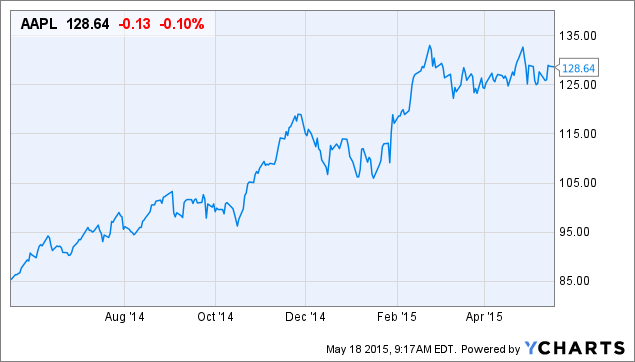