Apple Inc.: Analysts Weigh In Ahead of Today’s Earnings Release

Wall Street analysts are gearing up for Apple Inc.’s (NASDAQ:AAPL) fiscal third-quarter earnings report scheduled to be released this afternoon after the closing bell, with a conference call at 5:00PM ET.

White wrote, “With the arrival of our first Apple Watch on Friday, we strongly believe the company has developed another “homerun” product category and our recent trip to China highlights to us a more sustainable iPhone cycle with the larger-sized iPhone 6/6 Plus. At the same time, Apple has been more generous in its return of cash to shareholders over the past three years and the company plans to update investors on this program during tonight’s call. Finally, Apple is trading at just 10.8x (ex-cash) our CY:16 EPS estimate and we believe has room for multiple expansion.”

Piper Jaffray analyst Gene Munster also weighed in today on Apple ahead of earnings, reiterating an Overweight rating on the stock, with a $160 price target, which implies an upside of 21% from current levels.

Munster wrote, “When Apple reports Mar-15 earnings this afternoon (April 27), we expect excluding FX, the company will report revenue in line with Street estimates ($56 billion, implies 57 million iPhones) and guide Jun-15 up by 1% at the high end of its guidance. While expected by investors but not reflected in Street estimates, FX will weigh on results and guidance by 2-3%.”

“Overall, we believe there could be some modest upside to the rest of CY15 and CY16 based on iPhone market share declining at a slower rate than other cycles (share gains), which we believe helps the upside case for the stock. We expect the capital return headline number closer $170 billion. Apple will not be reporting much substance around early Watch demand.”, the analyst added.

Additionally, Brean Capital analyst Ananda Baruah came out today with a special report on AAPL, initiating a Buy rating on the stock, with a price target of $160.

Baruah stated, “We believe AAPL stands to deliver material EPS upside from 1) iPhone ships through ’17, 2) favorable GM from both iPhones and iPhone mix (more 6 Plus’ than realized), and 3) materially more Opex $ leverage through at least ’16 as AAPL realizes the benefits from the recent iPhone 6 and iWatch investment cycles. Additionally, we believe AAPL will continue to use capital return materially the next few years and that this can both catalyze and provide a floor under the stock. Our $160 TP is 14x our ’17 EPS estimate of $11.84.” 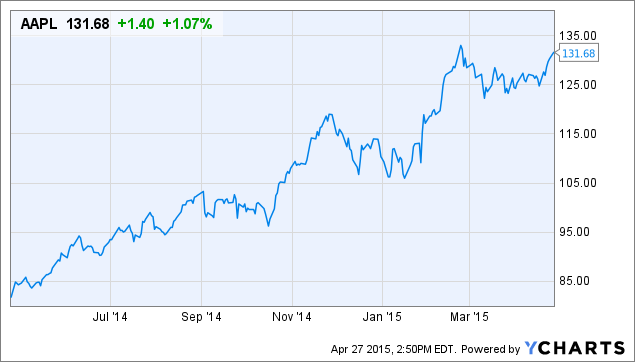