FBR Capital analyst Daniel Ives is out today with an update on Apple Inc. (NASDAQ:AAPL), straight from the annual WWDC Conference. In its Keynote, Apple focused on the much anticipated streaming music product launch, iOS updates (IOS 9), a new OS X dubbed El Capitan, Apple Pay enhancements, and a major focus around app development for the Watch. The analyst maintained an Outperform rating on the stock, while no price target was provided. Ives wrote, “The major headline announcement was the launch of Apple Music, a 24/7 streaming music service that will compete with the likes of Spotify and, thus, help build a “moat around the all-important iTunes franchise.” Integrating the $3 billion Beats acquisition, consumers can now purchase this service at $9.99/month/$14.99 as a family plan. We view streaming music as the tip of the iceberg for Apple, as the company ultimately embarks further down the software/streaming services path over the coming years helping to expand its massive market opportunity.”

The analyst continued, “As anticipated leading up to the event, there was no announcement around the company’s streaming TV service, although we believe the company will continue to head down that path with the possibility of an announcement in the coming months/ late 2015. Overall, while Apple remains laser-focused on strong iPhone 6/China hyper growth in the near term, we believe that as evidenced by presentations so far at WWDC, Apple’s next-generation product ideas appear poised to further expand its consumer tentacles over the coming years with the right products at the right time to execute as a leader in the devices and services space.”

According to TipRanks.com, which measures analysts’ and bloggers’ success rate based on how their calls perform, analyst Daniel Ives has a total average return of 10.4% and a 67.5% success rate. Ives has a 0.7% average return when recommending AAPL, and is ranked #320 out of 3612 analysts. 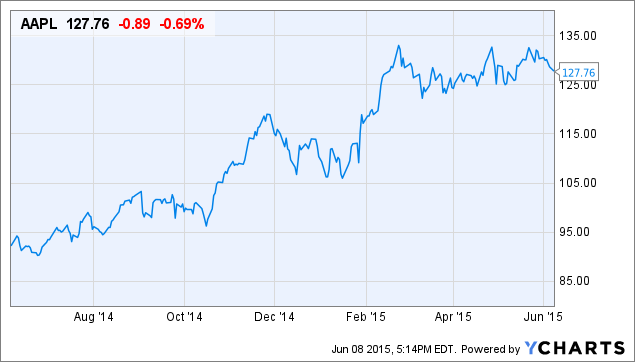