Piper Jaffray analyst Gene Munster weighed in today with a few insights on Apple Inc. (NASDAQ:AAPL), as pre-orders for the Apple Watch began this morning at 12AM PT. Based on the analyst observations and media reports, launch day supply (April 24th) was largely sold out within the first 10 to 30 minutes depending on model. Most lead times now suggest a 4-6 week or June/July ship date, according to the analyst.

Munster noted, “We have been monitoring lead times this morning and it appears that between 6AM and 9AM ET, lead times have been stable for 5 different SKUs at 4-6 weeks or June/July ship date. We believe that the current stable lead times suggests that supply was the main limiting factor in this morning’s sell out as if demand were extremely strong, it would seem that lead-times would continue to increase.”

Furthermore, “Today is the first day for consumers to set up appointments to see the Watch in person, thus we believe demand should now ramp as consumers see the device vs. the early demand from people who just wanted one regardless of in person impressions.”

Bottom line, “We view this as an indication of solid demand paired with very limited supply, with supply being the most significant limiting factor. We continue to expect modest sales in the June quarter (2.3m units) as demand ramps over time, with Dec-16 a breakout period.”

The analyst reiterated an Overweight rating on AAPL with a price target of $160, which represents a potential upside of 27% from where the stock is currently trading. 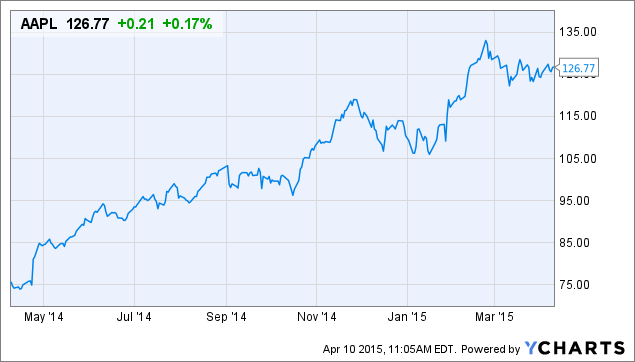