Cantor Fitzgerald analyst Brian White weighed in today with a few insights on Apple Inc. (NASDAQ:AAPL), as preliminary sales for the companies in Cantor’s Apple Barometer have been reported, and March came in well above historical seasonality. According to the analyst, this was the second-best March performance since the iPhone has been on the market.

White noted, “Given Apple’s powerful iPhone cycle, the momentum we see around the iPhone in China this week, and the upcoming launch of Apple Watch, we believe there is still plenty to look forward to at Apple during this transformational cycle. At the same time, we believe Apple’s valuation has room to expand from depressed levels (i.e., 10.5x our CY:16 EPS estimate, ex-cash) and we reiterate our BUY rating on Apple.”

Meanwhile, the countdown is on for the Apple Watch release date, which has officially been set for April 24 in select countries. With the start of Apple Watch availability approaching, the analyst’s current model reflects Apple Watch units of 20.6 million in the first year on the market. For FY:16, he has modeled out 25.1 million units, revenue of $11.7 billion, and an EPS contribution of ~$0.67.

The analyst reiterated a Buy rating on AAPL with a price target of $180, which implies an upside of 41% from current levels. 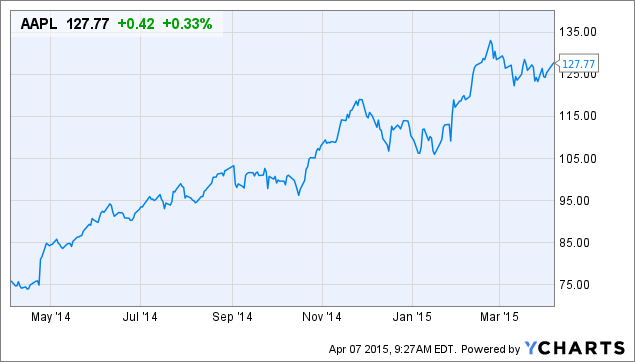