Cantor Fitzgerald analyst Brian White weighed in today with a few insights on Apple Inc. (NASDAQ:AAPL), as the company will hold an event today at San Francisco’s Yerba Buena Center. The event, whose colorful invite only says “Spring Forward,” kicked off at 10 AM PDT. The analyst rates AAPL a Buy with a $160 price target, which represents a potential upside of 25% from where the stock is currently trading.

White noted, “Today, Apple’s Invitation-Only Event kicks off in San Francisco at 10:00AM PT, and we will be in attendance. In our view, this is the most important productevent for Apple since the company unveiled the iPad to the world in January 2010 (launched in April 2010). Apple titled the invitation to this event, “Spring Forward”,that syncs up with yesterday’s move to daylight saving time and the planned launchof Apple Watch in April. As such, it is clear to us that Apple wants to polish up thedetails around the Apple Watch beyond what was initially shared in September and potentially touch on other areas.”

Furthermore, “Given Apple’s powerful iPhone cycle, a big ramp inChina, the upcoming launch of Apple Watch, expectation for higher returns of cashto shareholders and entry into the Dow Jones Industrial Average, we believe thatthere is plenty to look forward to in 2015 and that Apple’s valuation still has roomto expand.” 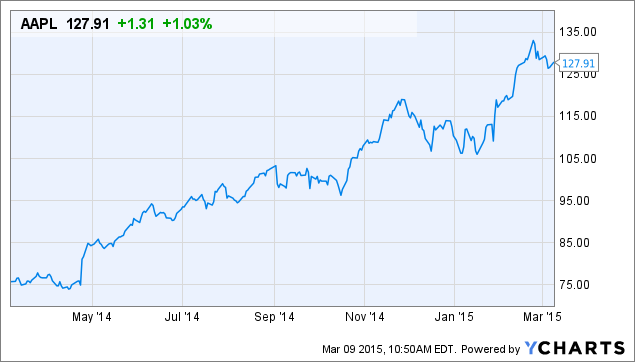