In a research report published May 12, Cantor analyst Youssef Squali downgraded shares of AOL Inc (NYSE:AOL) from Buy to Hold, while keeping his price target at $47 price target, which reflects a potential downside of nearly 7% from current levels. The decreased rating comes in response to the announcement that the company will be acquired by Verizon Communications Inc. (NYSE:VZ) for $50 per-share in an all-cash transaction. That said, the analyst thinks that the acquisition could be positive for Yahoo! Inc. (NASDAQ:YHOO).

Mr. Squali wrote, “Our downgrade is predicated on 1) the fact that at $50/share, or ~8x our 2015 OIDBA, we find the valuation relatively fair for a company growing mid-single digits and ~20% OIDBA margins; and 2) our belief that we’re not likely to see a higher bidder. We think this deal highlights the attractiveness of assets that bring scale and technological capabilities that can be leveraged across larger platforms in the highly dynamic ad industry.”

“We believe this transaction could be positive for Yahoo! given 1) its position as the last remaining large scale digital Media company of its kind; 2) an interesting combinations of assets including Video, Mobile and Social; and 3) a valuation, which when adjusted for the Asian assets, implies almost no value for core Yahoo! We have a BUY rating on Yahoo! and $60 PT.”, the analyst added. 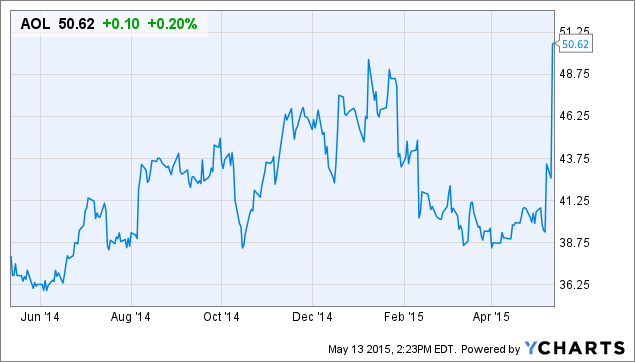