Netflix, Inc. (NASDAQ:NFLX) shares were on the rise Thursday after releasing first-quarter results which were stronger than expected. In reaction, analysts from Canaccord Genuity, and Cantor Fitzgerald took a positive stance on the stock, while an analyst from Wedbush took a different route with a more negative perspective. Netflix shares are currently trading at $553.13, up $77.67 or 16.34%.

Canaccord Genuity analyst Gregory Miller reiterated a Buy rating on NFLX, and raised the price target to $565 (from $530). The analyst reasoned the new price target saying, “We believe this stock will continue to be a significant outperformer, as it will become increasingly clear that the company’s lead in being the first to market with commercialfree on-demand video streaming service is only growing stronger. With such strong market share gains in the quarter, we are again increasing our DCF-driven price target.”

Cantor Fitzgerald analyst Youssef Squali also weighed in today on the stock, stating, “Netflix reported very strong 1Q:15 results, with the all-important subscriber metrics again exceeding expectations for both domestic and international segments. Streaming sub guidance for 2Q:15 is 25% ahead of consensus, driven by international growth. With 60M+ streaming subs, a superior value proposition and a gradual but persistent shift to OTT, we remain constructive on NFLX.” Squali reiterated a Buy rating on the stock and raised the price target to $580 (from $500).

Wedbush analyst Michael Pachter had a more doubtful perspective on the stock, reiterating an Underperform rating, but also raising the price target to $270 (from $245). 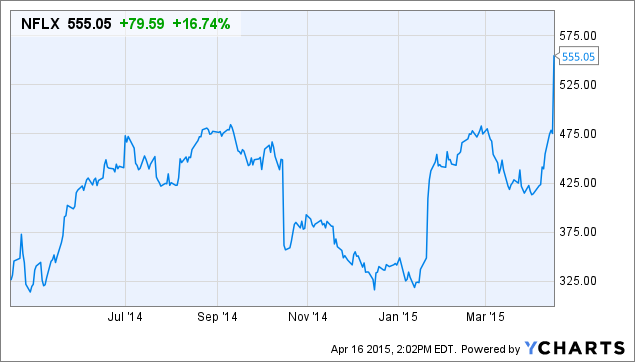