Tobira Therapeutics Inc (NASDAQ:TBRA) shares are on fire this Tuesday, jumping over 700%, following the news that the company entered into a definitive agreement under which Allergan (NYSE:AGN) acquires Tobira for an upfront payment of $28.35 per share, in cash (a 740.08% premium over Monday’s close of $4.74), and up to $49.84 per share in Contingent Value Rights (CVRs) that may be payable on the successful completion of certain development, regulatory, and commercialize milestones, for potential consideration of up $1.695 billion.

H.C. Wainwright analyst Ed Arce commented, “We believe the first such milestone–worth $13.68 per CVR upon the Phase 3 initiation of CVC–is likely in 1H17. Once Tobira reported top-line results of the Phase 2b CENTAUR study on July 25, TBRA shares dropped almost in half, primarily driven by investor views of failure of the study to meet the primary endpoint of a 2-point improvement in NAS without worsening in fibrosis. As opposed to our competitors, we have consistently maintained that the primary endpoint did not matter because the FDA has made it clear that it is no longer an approvable surrogate endpoint for NASH drugs.”

“Importantly, we believe that this acquisition brings further validation to the out-sized commercial opportunity of the broader NASH space. Ultimately, we view the takeout premium–perhaps shocking to some–as more a reflection of the market’s misspricing of TBRA following CENTAUR results, than due to any out-sized largesse on the part of Allergan,” the analyst added.

Maxim analyst Jason Kolbert provided a comparison between Tobira’s NASH asset and Galmed’s, “Tobira’s Cenicriviroc (CVC) is an anti-inflammatory anti-fibrotic drug. It is a dual CCR2/CCR5 antagonist. These receptors are implicated in liver inflammation and fibrosis. In the CENTAUR trial, year 1 data showed significant improvement in fibrosis. This was a secondary endpoint in the trial, while the primary endpoint of a two-point change in NAS was not met.”

“Galmed’s Aramchol is a novel Fatty Acid Bile Acid Conjugate. It has a dual MoA consisting of SCD1 modulation and induction of an ABCA1-dependent cholesterol efflux. As such, it is seen to modulate hepatic lipid metabolism in numerous animal species. Recently, anti-fibrotic and anti-inflammatory effects were suggested in C57Bl/6 mice after four weeks on an MCD diet. The Phase IIa study demonstrated significant reduction in liver fat content measured by magnetic resonance spectroscopy (MRS). This implies an effect on both the underlying condition as well as anti-inflammatory and anti-fibrotic effects.”

“A combination of the two drugs could provide an enhanced MoA. M&A excitement remains a key theme in the NASH space,” Kolbert concludes.

As of this writing, all the 4 analysts polled by TipRanks rate Galmed stock a Buy. The average 12-month price target is $12, marking a 154% potential upside from current levels. 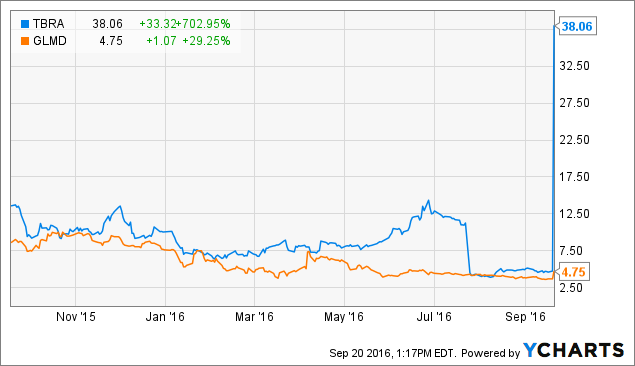 These 2 Penny Stocks Could Rack up Triple-Digit Gains, Say Analysts

Why Galmed Pharmaceuticals (GLMD) Is a $59 Stock