Shares of Nike Inc (NYSE:NKE) are up nearly 5% after it reported its fiscal fourth quarter earnings for 2015, Thursday. The company reported an EPS of $0.98, sales which were ahead of estimates, and a 13% increase in constant currency. Gross margins were also way above the firm’s estimate. In response to the earnings results, analysts from Piper Jaffray and Canaccord Genuity weighed in with their differing views on the athletic apparel company.

Piper Jaffray analyst Erinn Murphy came out today with a research report on Nike, reiterating an Overweight rating and boosting the price target to $120 (from $115), which represents a potential upside of 14.0% from where the stock is currently trading.

Murphy noted, “Clearly, the brand continues to gain share globally and we are pleased that its most established market, North America, is still seeing mid-teens growth.” Further, “Gross margin improved and was up +60 bps, ahead of our +30 bps estimate. SG&A was higher than we anticipated at 33.4% vs. our 32.8% estimate.”

Canaccord Genuity analyst Camilo Lyon weighed in with a more cautious stance on the stock, maintaining a Hold while raising the price target from $96 to $104.

Lyon observed, “Given NKE’s discipline with supply of inventory, we believe it can deliver another year of solid growth in the category. As for running, NKE is seeing strength in its performance category, and more importantly it will likely introduce a new running innovation at next year’s Olympics.”

Furthermore, “While the inventory issues in Mexico appear to have normalized, we suspect the macro issues in Brazil will likely continue to weigh on the region’s growth. The product reset in China continues to yield solid results as reprofiled stores are outpacing the rest of the chain and inventory in the channel is clean. In sum, we expect NA, WE, and China to continue to drive the bulk of the growth and profitability.”

According to TipRanks.com, which measures analysts’ and bloggers’ success rate based on how their calls perform, analyst Camilo Lyon has a total average return of 10.3% and a 64.6% success rate. Lyon is ranked #331 out of 3679 analysts. 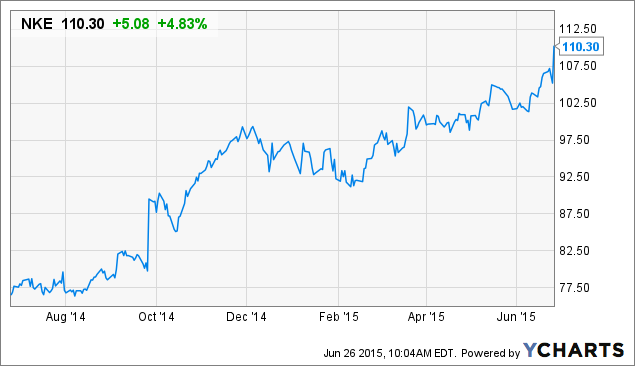